[Abdominal]
I like to rap a lot so permit me to rap a little
My name is Abdominal I'll make you laugh and giggle
Just like a little schoolgirl when I'm touching the mic
Me and a crap rapper? Nothing alike
Cos they crap, and I'm not
Could you demonstrate? Why not
Let me take this little opportunity so soon you'll see
How you and me be different when it comes to fluency
The crowd be rooting me and booing thee
First to hit 3 lines that you be polluting the
Atmosphere with, you'll get subjected to scrutiny
Stupidly oblivious to the soon-to-be mutiny on the
Part of the crowd,,eventually even your crew will be like
"Abdominal is pretty damn good"
But that's what I've been trying to say man
Would you remove those bananas from your earholes and pay attention
In the long run this will bring everyone less tension
And I won't be forced to have to hit you with these vicious battle raps
But really less battle raps than straight up facts
Kinda like a news report
Untrue? f*ck you be this Jews retort!
You'll lose the sport, can't you see the predicament?
Nurse, gauze, and lots of ligaments
Victim sent courtesy of a friendly neighbourhood Abdominal
Doing his best to fill the hospitals
They say he's some sort of musical vigilante
On a one-man crusade to do away with anything even remotely wack
He rips the lips off of rappers and frees the tracks
We really can't thank him enough I'd love to shake his hand
Say thanks for taking a stand evacuating the land of the uncreative and bland
"Doctor is it true when they say that he's as handsome as a deity"
Like a chiselled greek god, plus nimble like a tree frog
But with the strength of 10 men, who each possess the strength of ten men!
"In other words the strength of 100 men?" Nurse, please dont interrupt me when
I'm in the midst of a descriptive homage to this folk legend
Rumour has it that he's bench-pressing
At least 400 pounds and that's with the left arm alone!
What about the right? Writing poems
Simultaneously, insane ya can see but that's the type of mc that we're
Dealing with here, highly creative annunciation impeccable
Delivery style versatile very flexible breath control unparalelled
In his line of work his rhymes will hurt these spineless jerks
Yeah they'll still find the time to flirt, with all kinds of skirts
"He should try a nurse" keep your mind on your work
Like he keeps his mind on the verse when he's timing his words
You could set your clock to the rhyming ya heard eminating from between the two lips
Of the ABD-om-INAL, suckers think they swell
He'll be like "hmm pray tell"
They straight K-Tel wheras he be cold chilling
Steady knocking fillings outta mouths of super-villains
And then charging 'em for dental repairs
Lay em down gently in the dental chair
Fasten the bib, a real no-brainer
Next step in the procedure administer the novacaine
Or better yet a more effective anaesthetic
Like a pint of chilled rubbing alcohol for the vocally pathethic
Once theyre snorin the work commences by this
Blood-splattered, demented dentist
Dr. Abdominal extracting tongues, rendering wack rappers dumb
Some who look like they got a bit of endurance
Also get their lips sewn shut for assurance
I know it sounds harsh but he can't be sympathetic
In his war against the wackness it's an epidemic
Spreading over cities nations and continents
Abdominal heaven-sent antidote, through dopeness
With a 'M' on my chest, for microphonist 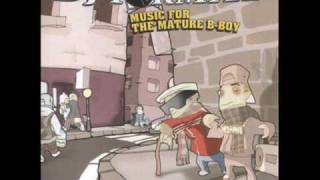