Well now you step inside but you don't see too many faces
Coming in out of the rain to hear the jazz go down
Competition in other places
But the horns, they blowing that sound

You check out Guitar George, he knows all the chords
But it's strictly rhythm he doesn't want to make it cry or sing
Yes then an old guitar is all he can afford
When he gets up under the lights to play his thing

And Harry doesn't mind if he doesn't make the scene He's got a daytime job, he's doing alright
He can play the honky tonk like anything
Saving it up for Friday night

Then the man, he steps right up to the microphone
And says at last just as the time bell rings
"Goodnight, now it's time to go home"
And he makes it fast with one more thing 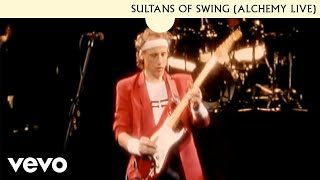 Rate Sultans Of Swing by Dire Straits (current rating: 9.45)
12345678910
Meaning to "Sultans Of Swing" song lyrics (3 meanings)
cheap_papa September 9, 2011-22:57
+2
The lyrics are well versed and explains themselves well in the story of the song and the guitar and riffs are exceptional. Great vocal timing and moderation of voice control accredited with the tempo
Para September 5, 2011-10:17
0
have you notice all the comments on this seem to be generic things an idoit who doesnt know what people really talk like...just sayin
jim June 6, 2010-3:44
0
I've heard it a thousand times but never read the lyrics until now. I only had a half notion of the lyrics. It's tough to 'sing' that song. He doesn't really 'sing' it, doesn't really 'cry' or 'sing'.
Watch Video Comment Enlarge font Correct lyrics Print lyrics