[Verse]
Fresh home, still using a kettle to whip, this fish ain't nothin' like tuna
Would've been more than meddling kids if Kruger taught me to whip up sooner
I don't trap with melanin kids, the rumour is Digga D is a groomer
I just mixed two five two with sixty, the boy Adz just ran for a tuna
And that's actually factual
Pyrex filled with oil, in jail, mixed that with mackerel
In Feltham using foil, in big man jail, man broke my capsule
ZK shoulda been at school, he left that place when cats called
Why? We all sold, drugs it's natural
Jheeze, I just got released
No more selling bariis, or hearing the govs with keys
And now I can rest in peace (Yeah, yeah)
Just like my paigons, it's haram for us to eat pork
But it ain't haram for them to get bacon, don't get cooked or shaven
Been in the field like Niko Belic, real yard man like Jacob (Mm-mm)
Don't get Chopped like Franklin's dog cah your soul might just get taken
Not green but Grove, my opps are broke
They ain't ballers, it's blatant
We got a CJ from Grove as well, but we ain't in San Andreas (Free him up)
Jojo got an L plate, he ain't even got his provisional license (Yeah)
Watch me whip this skeng and his head back jerk pin drop, that's nothing but silence
Five guys step on violence, GBK get bun, no Byrons
My young boys do what I say, I'm Simon, charged up and vibrant
We ain't sharing a drink when I let that sky, watch his head back tilt
They had my man cold outside, had to cover that kid in a quilt
She lined me and her juice got spilt, I lost no sleep, I don't feel no guilt
Ah shit, she needs some milk, case dismissed before it got built
I got a dotty off one of my eastenders but the son of a gun's not Nick
The queen that I want ain't Vick but I still make that on the square like Mick
My little shotter's in his prime time, if I send him now, TV at six (Check the news)
Like, how's he got so much talk on the 'net? Like he ain't been touched with a flicks
Old school days never had me a Rollie, I bought that aqua fresh (Yeah, yeah)
I told her "I want Oral B", now she's all on me and she's making a mess
She said that it's big for a slender, easy, I'm tender, don't undress
Ejaculate in her mouth or pull out, ejaculate on her breast, yes
Part 2

[Verse]
About ten for a show, come correct
Show respect, forty for a feature, I'm the hardest, what did you expect? (Yo, pay that)
I had hitters on the wing but I still made a ching
f*ck my future, didn't think, I just cheffed his neck (I got payback)
Spent forty on my car too, would've spent more if my insurance let me pass through
The other day, I was looking at a Lambo truck
In the showroom, with my rambo tucked
Sha said cut my hair and go back to the f*ckboy trim (Nope)
Far from a f*ckboy, you know I bust my spin (Dun' know)
I take L's in the field but I got more wins (Yup)
Shot a tape for half a milly and I bought more tings (Yeah, yeah)
This rap shit bringin' more bit shots (More)
Banging Buju banton, two bricks copped (Both of them)
Before rap, it was [?] and corners
Some used a phone box so I answered, no callers
Mum's life, let my gun rise, I get busy
So much guns, I had to share some with killy (Kind)
Ask them, so much guns, man run out places to park skengs
Two peb phones, man's renting them a rack a week each
Only 'cause they keep interrupting my sleep
And, bro, I want my little brothers to eat
But yo, I ain't givin' them a handout
When I needed a hand in, who brought bands out? (Who?)
There we go, you hear me, bro
I named a .44 long merry-go rounds
Only one will turn your head into a cheerio
Right wrist, twenty, left like sixty, basically seventy
And I don't like girls my age unless it's Maya or Tennessee
The rest in the U.K. just look dead to me
So I fly the foreigns in (Yup)
Smashed same day, I forgot they had to quarantine
And I got shooters on my team (Yup)
Bait guys, left five shell casings on the scene (Woi, woi, woi, woi)
You ain't never had to watch 45Hickok (Yup)
Had me feelin' like a nigga got ripped off (Nope)
But I was using wrong shells, I was buzzin' cah I never had the name at the side of the somethin'
I grew up listening to Calboy and BP (Killy niggas)
Then it turned to Little Reese and Chief Keef (Chicago)
Fourteen, really in the streets, knees deep
Puttin' four bills down and that was each week (Yeah, trappy wit' it)
More opps gettin' chatty wit' it
I'm just gettin' slappy wit' it
Na-na-na-na, na-na-na-na, nah, I'm gettin' Dappy wit' it
Explain lyrics
Correct lyrics 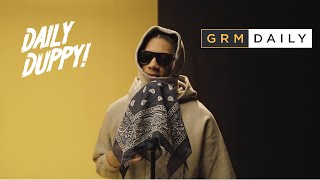