I turn around from whining sounds
Don't give us shit for making it
If your band's not signed, don't put us down!
Try playing hard, you stupid clown!

It's Poison with some different hair
It's crap that comes from everywhere
It's stupid, loser K-mart rap!
With more concern for coloured hair than music.

Wanna be a rock star! Have a limo with a juice bar! With an undisputed killer for a girlfriend
So I guess I'd better
Spit it! Barf it! Spew it! Sell it! Roast it! Toast it!

Oats, peas, beans and barley will grow!
Why we sell nobody knows!
You can say just how you feel
But look who's got the record deal!
Explain lyrics
Correct lyrics 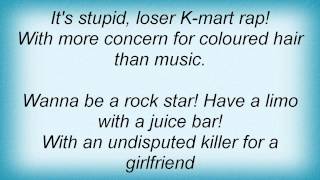