Bitch what do you want? Nigga what do you need?
A rock hard bone? A dime of weed?
Whatever it is hoe, you can hit him from a phone
But if ya don't want nothin' leave him alone he be gone

He moves quick real slick, never been to the pen or the forum
They got stories bout the dude the kids bragged when they saw him
And them laws he don't bomb that nigga just keep dippin'
Early in the morning flippin', coffee sippin'

Don't be trippin' on niggas they see him walk in the store
Get him some cigarettes, cigars and a Colt 4-0
Without payin' walk out that hoe so calm and so cool
?Who's that??, ?Man, that's the dude and he's a Goddamn fool?

Don't talk shit, no
He'll tell you to suck his dick
He's the dude
Hey, hey, here comes the dude

Da da do dap, Bla do blap dap
Bitches front 'em at the club they gettin' jab slapped, he don't cap
To him that bring too much attention
Keep his eyes open for premeditated lynchin'

You need to thank him for ya gal he made her suck a little better
He love makin' trash outta another niggas treasure 'Cause bitches for dude dog, come a dime a dozen
f*ck one, let one suck his dick then find another

He don't debate he concentrate on survivin'
He don't like to drive if he's been drinkin'
But he'll drink while he's drivin'
But he's higher than a f*ck, you'll never catch him sober
All his women quit him cause they got f*cked over

But all the p*ssy he got was p*ssy he earned
He'll fire up a sweet before you'll fire up yearn
Some say he's nice and friendly but the niggas no fool
He's so swift, he's so smooth, he's so calm, he's so cool dude

Who is it?
Devin the Dude [Incomprehensible] house remix
Who is it?

Don't talk shit, no
He'll tell you to suck his dick
He's the dude
Hey, hey, here comes the dude

Hey, hey hell yeah, can't you tell?
The dude been through hell
See the smoke in the air?
Shouldn't do the shit he do but see the dude don't care
Empty bottles of beer and empty rubbers everywhere

People spread rumors about him to bring him down
But if ya know him like I do you know he don't f*ck around
And he clowns and he jokes and he smokes and he hangs
But don't f*ck over the dude one night he showed me a brain, no name

I ain't gonna tell you all of his biz
He's down to fight for his friends, die for his momma and kids
Niggas be placin' they bids tryin' to do like he do
Try to be where he's been but they get folded in two, he's the dude

Who is it?
Don't play no funny games 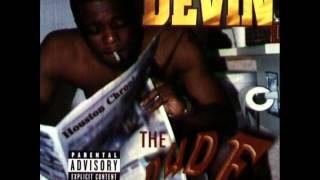