Tales From The Midst Of The Battle Lyrics

Tales From The Midst Of The Battle Lyrics


Part I: The Mission

General Kyrios, son of the king
Lived far away, higher than highest mountain
Once the king called him and said:
"My son, I've got a mission for you
It'll be dangerous and could take you to death
But you're the only one who can get through"

So Kyrios left his glorious home
Thirty long years he wandered alone
Preparing himself to fight against the evil ruler
Apollyon, who enslaved and hated the people

General Kyrios chose twelve lieutenants
Roaming with them he gathered troops
He helped the poor, sick and the weak
That was something he wanted to teach

When three hard years had gone
He had soldiers and friends, he was the One
But also Apollyon had loyal men
Who were blindly under his command

Part II: The Death Of Kyrios

Before the provincial governer they blamed:
"He agitates our people and says: 'I'm the king!'"
He said: "I will condemn you to death."

Apollyon's men tortured the general
They laughed at him, they spat on his face
And at last - like a thief - like a thief - he was slayed! The troops of Kyrios were hiding
They were scared, they were wondering
"How this badly can be everything?
Without our general the war we cannot win."

Three days were gone, filled with sorrow and pain
The general was buried, they could not gain
His friends, they could see no hope
And the traitor had died at the end of a rope

Part III: The Hymn For Victory

With the first beams of morning sun
Came some women from the grave and told everyone
"It's empty, he's no longer there, he lives again"

With the first beams of morning sun
Came some women from the grave and told everyone
"It's empty, he's no longer there, he lives again"

Apollyon was overthrown, he had no power anymore
To enslave the people with his evil force

Kyrios plundered to freedom all who believed in him
Now they were free from fear, free from death and sin
Whoever wants to can live his life free
In the troops of Kyrios, who is J.C.

To the father's home with Him we will arive
Above the mountains, into the Heaven's high
And Apollyon, who is Satan, will be
Thrown into the Abyss, the Fiery Sea 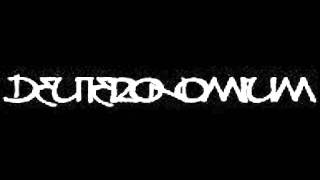 check amazon for Tales From The Midst Of The Battle mp3 download
these lyrics are submitted by kaan
browse other artists under D:D2D3D4D5D6D7D8D9D10
Record Label(s): 2008 Bullroser Records
Official lyrics by