So who was first?
Obviously not me.
She's locked up inside herself
And I can't get anything free
So won't somebody tell me please
Why the former owner always keeps the keys.

There's no bubbles to burst
No bursting out crying nor dying of thirst
She's utterly tied to somebody else
And it seems he got there first.
And no, I'm not untying
The reins around her neck that she feels
And I won't try to prise out of her the truth anymore
When she lies about the things that she sees
Because the former owner always keeps the keys.

There's no calling
"come here, you're necessary to me." There's no excitement in her face when I implore
"corrupt me and confess to me some more."
And when we hear trees falling or see people disappearing
Her emotions won't be reached or released,
Because the former owner is keeping the keys

Like a ticket inspector running for a bus
Irony's revenge surrounds us.
And it's ironic that he promised you he'd never let you go
When he's left you used-up and disturbed
And I said "just as the early bird catches the worm
The early cat catches the bird"
But that former owner is keeping his word
Explain lyrics
Correct lyrics 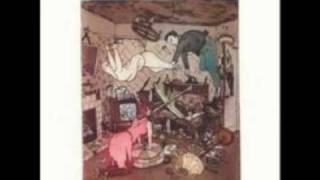