Passage To The Abyss Lyrics

Passage To The Abyss Lyrics


Slaughter evolved to a mean to be
Evil prevailed more than could be foreseen
Hatred and malevolence, the dominant natures
Carnage after carnage, feasts for the masters
We kill, for ephemeral possessions
We slay, in the name of discretion
Greed, the savage damnation
Dying, by our creations
Disfigured forms of existence, from cradle to grave
Sweeping away the eminence once known, with no soul left to save
No one left to save
"Greed has poisoned men's souls - has barricaded the world with hate - has
goose-stepped us into misery and
bloodshed."
"Millions of despairing men, women, and children - victims of a system that makes
men torture and imprison innocent people."
"The misery that is now upon us is but the passing of greed - the bitterness of
men who fear the way of human progress, The hate of men will pass, and dictators
die."
The world, on the edge of downfall, breaking down, making it's passage to the
abyss
Our race, desperately crawls, reminiscing it's false ancient bliss As Ereshkigal rise, summoned by the grievance from our own essence
Mankind declines, beyond the walls of logic and reason they transcend
Hypocrite realities, greed seeking societies
Wars for peace, Slaughters to please
Destined to live in plague and decease
Only until the supremacy of their masters cease
To the blackest of times
To the deepest of the seas
The sun of humanity, forever disappears
Forever gone!
it's the point of no return
Dogmatic ideologies with nuclear capacities
Are we fighting this cancer or just silencing the pain?
"brutes have risen to power. But they lie! They do not
fulfill that promise. They never will! Dictators free themselves but they enslave the
people."
"democracy, liberty and equality are words to fool the people. No nation can
progress with such ideas. They stand in the way of action. Therefore, we totally
abolish them."
"In the future, each man will serve the interest of the State with absolute
obedience. Let him who refuses beware!"
Explain lyrics
Correct lyrics 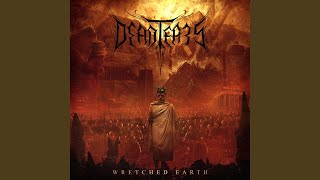 check amazon for Passage To The Abyss mp3 download
these lyrics are submitted by karam bassam
browse other artists under D:D2D3D4D5D6D7D8D9D10
Record Label(s): 2020 2592913 Records DK
Official lyrics by