In The Glare Of The Moon Lyrics

In The Glare Of The Moon Lyrics


The rain slowly wets my face
As I pass through the cemetery gates
Shadows licking every move I make
Enshrouding the earth where I walk
The sound... The spinechilling sound
Of owls howling in the night
Yes, they sang for me

For me they chant, speaking in tongues
Preaching for my restless soul
Choirs as if from the abyss itself
A dirge of celestial creeps
Through the night this opus was heard
As a symphony of the dead

[chorus:]
In the glare of the moon

The winds kept embracing me
Filling me with it's decay
As I fixed my eyes on the moonlight tombs
In ruins surrounded in black
These catacombs, these distant graves
Almost seemed to glow
Closing in as they called for me

I turned around and read the epitaph
And so my blood froze cold as ice There my name was engraved
I saw it clear, in the glare of the moon

Punctured lungs and pierced through the heart
It slit my throat as I gasped for my final breath
Drenched in blood, completely drained
And as I fell to the ground I beheld this creature of the night
But when my soul arose to join the night,
Claws of death pulled it back, in the glare of the moon

[chorus:]
In the glare of the moon 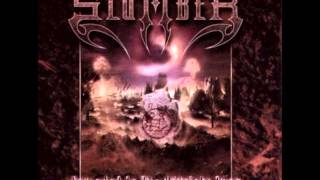 check amazon for In The Glare Of The Moon mp3 download
browse other artists under D:D2D3D4D5D6D7D8D9D10
Record Label(s): 1999 Hammerheart Records
Official lyrics by