You know what Stuart? I like you.
You're not like the other people here in the trailer park.
Oh, don't get me wrong. They're fine people. Good Americans.
But, they're content to sit back, maybe watch a little Mork and Mindy
on channel 57. Maybe kick back a cool Coors 16-ouncer.
They're good fine people, Stuart but they don't know, what
the queers are doing to the soil.
You know that Johnny Wurster kid, the kid who delivers papers in the
neighborhood? He's a foreign kid. Some of the neighbors say
he smokes crack, but I don't believe it.
Anyway, for his 10th birthday, all he wanted was a burrough owl
"Dad, get me a burrough owl. I'll never ask for anything else as
long as I live". So the guy breaks down and buys him a burrough owl.
Anyway, 10:30, the other night, I go out into my yard.
And there's the Wurster kid looking up in the tree.
I said, "What are you looking for?"
He said, "I'm looking for my burrough owl".
I said, "Jumping Jesus on a pogo stick. Everyone knows that a burrough
owl lives in a hole in the ground. Why the hell do you think they call
it a burrough owl, anyway?"
Now Stuart, do you think a kid like that is gonna know
what the queers are doing to the soil?
I first became aware of this, about 10 years ago. The summer my oldest boy Bill Jr. died. You know that carnival that comes to town every year?
Well that year it came with a ride called the Mixer. The man said, keep
your head and arms inside the mixer at all times.
But Bill Jr., he was a daredevil. Just like his old man. He was leaning
out saying, "Hey everybody, look at me, look at me". Oh, he was
decapitated. They found his head over by the snowcone consession. A
few days after that, I open up the mail and there's a pamphlet in
there, from Peublo, Colorodo. And it's addressed to Bill Jr. And it's
entitled, "Do you know what the queers are doing to our soil!"
Now Stuart, if you look at the soil around any large U.S. city
with a big underground homosexual population. Des Moines, Iowa, for
example. Look at the soil around Des Moines, Stuart. You can't build
on it, you can't grow anything in it. The government says it's due
to poor farming. But I know what's really going on, Stuart. I know
it's the queers. They're in it with the aliens. They're building
landing strips for gay Martians. I swear to God.
You know what Stuart, I like you.
You're not like the other people, here in the trailer park.
Explain lyrics
Correct lyrics 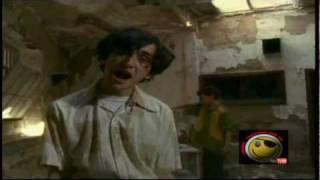