We are singing, you this message
Through our music, reaching for a brave and brighter
New tomorrow, is the future
We must make it, safe and happy, for the children

Aiyyo I jump back, put the aim on my shot
It's mandatory, handle glory over with the rock
I'm not a rough guy but a tough guy to beat over drums
No son to this, I'm a rhyme bastard
Some mastered the art of cash, but not the part that lasts
And disappear after doin' two albums
We're not your normal team and we still do ours to fit
Hope inside this, don't define it's

Quits for those who oppose the new
Playin' they've outgrown rap like a size 5 shoe
Oh they all need you now, alternative touch
Were surprised, no demise for us
We on the rise to bust big, how you fig' we couldn't
Never run out of verbs for you to sip, I told you we wouldn't
I never popped Crist' or popped fists, girl named Chrissie
Was the first, which made it even worse not to miss me

So I'd like to take the time to shout out the JB's
Next on my list is A Tribe Called Quest
Latifah my Queen, Monie Love, Dres and Mr. Lawnge
Chi-Ali, on your head God bless
Never ring chasin', the permanent tat
In this rap shit, y'all are just temporary lick-ons
Fadin in the days to come
While the name De La and the legacy built lives on 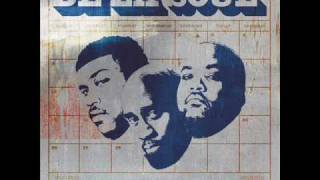