True To The Game Lyrics

True To The Game Lyrics


[Kanye]
"How do you feel, uh, when they said the crips were gonna, uh, kill you? I said man, that was the headline, but when they said they wanted to beat me up, I said that's great! Them my brothers, they love me. They don't want nothing to happen to Ye', they just want to beat some sense into me. I love Daz!"

[Daz]
Hey yo, it's Daz, the nigga you love to hate with a new song
So what really goes on?
Nothing but a come-up, but ain't that a bitch
They hate to see a young nigga rich
But I refuse to switch even though
'Cause I can't move to the snow
'Cause soon as y'all get some dough
Ya wanna put a Kargin on your elbow
Moving out ya neighborhood
But I walk through the ghetto and everything is all good
Little kids jumping on me
But you, you wanna be white and corny
Living way out
"f*ck Trump, nigga", spray-painted on your house
Trying to be white or a Jew
But ask yourself, who are they to be equal to?
Get the hell out
Stop being, a Uncle Tom, you little sell-out
House nigga scum
Give something back, nigga, to the place where you made it from
Before you end up broke (muthaf*cka)
f*ck around and get your ghetto pass revoked
Yeah, I'm saying yo name, you know who you are, Kanye
Be true to the game
[Donald Trump]
By the way, in all fairness, Kanye West gets it. When he says that African American unemployment is the lowest in history. He knows that people are watching. That's a very important thing he's done for his legacy, it's a very important thing"

[Daz]
When you first start rhyming it started off slow, and then you start climbing
But it wasn't fast enough I guess, so you gave your other style a test
You was hardcore hip-hop
And look at you now, Kanye you done flip-flopped
Giving our music to the mainstream
But you know they ain't down with the team
They just sent they boss over
Put a bug in your ear, Kanye, and then ya crossed over
On TMZ, but they don't care
They'll have a new nigga next year
Soon, ya out in the cold
No more white fans, and no more soul
See, you might have a heart attack
When you find out the black folks don't want you back
And you know whats worse? (What's that?)
You was just like the nigga in the first verse Stop sellin' out ya race
And wipe that stupid-ass smile off your face
Niggas always gotta show they teeth (Kanye!)
Now I'ma be brief, be true to the game

[Stephen A. Smith]
“That is the most ignorant thing that I've ever heard come out of the mouth of an African-American. It is disgraceful... it's an insult to our ancestors what this man said, that that was by choice is one of if not the greatest insults... I'm ashamed of Kanye West"
[Daz]
A message to the Oreo cookie
Find a mirror, and take a look, G
Do you like what you see? (Nah)
But you're quick to point the finger at me
You wanna be the big fish, you little guppy
Black man can't be no yuppie
You put on your suit and tie, and your big clothes
You don't associate with the Negroes (nigga)
You wanna be like Trump
But Trump is calling you a nigga, you dumb f*ck
So back off genius
I don't need you to correct my broken English
You know that's right
You ain't white
So stop holding your ass tight
'Cause you can't pass
Trying to get lipo
With yo black ass
Mister Big
But in reality, you shorter than a midge
You only got yourself to blame
Get a grip, Kanye, and be true to the game

[Outro - Van Lathan and Daz]
"Kanye, you're entitled to your opinion. You're entitled to believe whatever you want, But there is fact, and real-world, real-life consequence behind everything that you just said. And while you are making music and being an artist and living the life that you've earned by being a genius, the rest of us in society have to deal with these threats to our lives. We have to deal with the marginalization that has come from the 400 years of slavery that you said, for our people, was a choice?! Every day we have to walk into that truth while you choose to say things, to be honest with you dog, are non sensical. You want us to think freely, that's fine, I'll combat your free thought with my free thought because mine is grounded in a reality that I have been given and the reality that I'm going to change and I'm not going to to do it by pretending that the enemies are on the same team as me and frankly, I'm disappointed, I'm appalled and, brother..."
Stay true to the game!
Explain lyrics
Correct lyrics 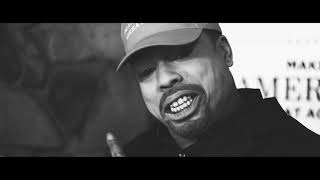