Driving across the Illinois plain
Hard times in '33
John's got a bottle and he's feeling no pain
Just the usual low down misery
Hey John don't you think it's a crying shame
A man lose a farm and he ain't to blame
"They're suckers," says John Dillinger

It's another bleak November day
Can't decide to rain or snow
The money's in the bags and they're getting away
Heading north to Chicago
Big gray buildings, little gray men
Have a little fun then we'll do it again
"All right," says John Dillinger

Luther's bleeding from a hole in his side I don't believe he'll make it through
Ruby cradles his head and she starts to cry
Oh God, what can I do?
I've always been a gangster's girl
Don't die and leave me alone in the world
"Shut up," says John Dillinger

Across his lap a sub-machine
Under his arm a .38
He's feeling alive, he's feeling mean
His yellow eyes are filled with hate
The papers say he's a Robin Hood
Mistreated and misunderstood
"f*ck'em," says John Dillinger 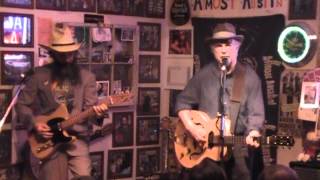