Without Ceremony And Bell Toll Lyrics

Without Ceremony And Bell Toll Lyrics

"That bitch must have done it.
She must be the offspring of satan himself"

"She threatened me that inside I would melt
'cos I didn't give her butter" - the poor girl yelled
So the witch was bound in heavy chains.
And taken to the court as a servant of hell

"I met a mysterious black man.
He kissed me and taught how to do harm"

As interrogation and torture went on. Heard the good people of the court horrible things
Thirteen years as servant of satan.
A whore and a right hand to the dark prince

Sabbaths, or devotions to the devil
Were held on a small nearby hill
At the peak of the torment
She turned in a few who had been there

"I met a mysterious black man.
He kissed me and taught how to do harm"

343 days she spent in prison.
While the court sentenced her to death
A morning when the summer was at its warmest.
She was taken out and beheaded with another witch

Burned to ashes, spat on, despised
Buried into a hole outside of the holy ground
Shamefully she was laid to rest
Without ceremony and bell toll
Explain lyrics
Correct lyrics 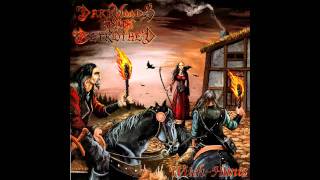 check amazon for Without Ceremony And Bell Toll mp3 download
browse other artists under D:D2D3D4D5D6D7D8D9D10