[Verse 1: Daboii]
Niggas want me dead, what's the joke? What y'all waiting on?
All you niggas bitches to be honest hope y'all take it wrong
You put a deuce in a liter? We pour eights in those
And we the reason all opps been praying for
You don't live what you rap, you just making songs
Heard y'all got test dummies see y'all break the bros
You don't slide over here 'cause it ain't condoned
Bitch got ass in them jeans but can you shake it though?
I'm to the neck with this. 40 f*ck a state patrol
And you ain't doing shit if you ain't hated on
They never thought about the booth 'til we came along
Think I'm waiting for that pearl? Bitch get skated on
Shake the bitch for the back shoot the bank vault
And we ain't worried 'bout a bitch, we replacing those
My government? That shit ain't to know
Bitch my life been a movie, turn the cable on
Talking like you got it, well let's get it then
Oh you really live that live? Nigga live it then
What I do on these beats can't be did again
Type to do what I want with no privileges
Bitch I'm woozy as f*ck, Perkies kicking in
Your man still live with his mama 'cause he still a kid
You was p*ssy when we was younger so you still a bitch
And bitch period ain't no sentences
Stop talking 'bout them streets, boy you not in 'em
Niggas f*cking up the code, I can't mob wit' 'em
I send peace to your city what the profit is?
When that water get deep they need oxygen
I get paid to talk shit bitch I jive different
Bitch keep telling me to stop when I'm not finished
You ever heard about respect? I'd die for this
On my knees when I pray I hope God listen

[Verse 2: Yhung T. O.]
Niggas speaking on that block but they don't be there
Get the drop on a opp nigga we there
Niggas don't ever up the scope 'cause they be scared
Tell 'em drop the location, we can meet there
I don't f*ck wit' niggas 'cause they females I don't f*ck wit' niggas 'cause they be 12
Bitch I'm off the lot, this a V12
Bitch this vvs you see the detail?
Still tryna dodge a case you tryna come for me
And I'll shoot a nigga 'fore I run from 'em
Heart broke from that shit that you done to me
Loaded up this Glock and put a drum on it
Chain used to cost ten, I can't tell you what it cost now
Ever since I done booked in it I been knocking walls down
Ever since I been up niggas hoping that I fall down
And I got a dub to knock a nigga down, nigga right now
Can't put this pipe down, don't fight now, my niggas bite down
Since bro been locked down, I been sending hella kites now
Was hard up on that net nigga don't start talking nice now
We slide on Christmas time, masks down and knock his lights down
Know I'm wit' it, I don't even need no co-defendant
Act like we don't know who did it even though bro done did it
2015 I was broke now I don't got no limit
2015 said you was and bitch you still ain't did it
Heard your broke ass bought a gun and you still ain't wit' it
Had my chain on in your hood and you still ain't strip me
How you talking about you pimping but you need the bitch?
Nigga, free the bitch
Talking 'bout you fighting demons, where that demon at?
Niggas stole our whole style and we need it back
Stop talking 'bout them bands 'cause you don't got 'em
And stop talking 'bout them foreigns 'cause you don't drive 'em

[Outro: Daboii]
Niggas throwing all this shade 'cause they really fans
Plug they hands don't shoot at garbage 'cause they really can't
Bitch I'm Daboii you a silly man
How the f*ck can I change, this who I really am
Bitch thought that I was steak, caught the wrong vibe
We ain't worried 'bout a bitch 'cause they gon' die
When I'm gone nigga slide, nigga don't cry
And I ain't never been no bitch and that's on mine
Bitch
Explain lyrics
Correct lyrics 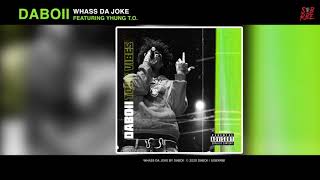