Bitch, it's DaBaby, what you heard about me? (Uh)
I put that nigga up, now niggas actin' nervous 'round me (Yeah)
I'm in the rental truck sticked up like Walker Texas Ranger (Bitch)
I'm on my grind like f**k a bitch, I get some pussy later (Huh)

Don't even call my phone, you used to be a hater (Huh)
Could have f**ked your bitch, nigga (Yeah), she made my dick soft (Huh)
I left from the jail, had like 336 missed calls (Brrt)
Oh, they wanna check on me now (Huh), you don't really love me admit it (Bitch)
I'm with a bitch from the west side of town, I like my hoes ghetto and pretty
I got that iron and I pull it out now, you ain't the only one with it (Boom)
I'm tryna go get the cake for my daughter like it's her birthday, can you dig it? (Can you dig it)
They tell me they like how I do my lil' dance, I can't really dance, I be jiggin' (For real)
And I'm 'bout to hop on a flight out to Cali, free Dodge, man, they got him in prison (Free)
I gotta go sit down and meet with a label, they better be talkin' some millions (Millions)
And if not, I'll go check on the price of the pounds, blow it down and fly back to the city
Like f**k it, let's get back to work (Okay)
Blow a kiss at a bitch, I'm a flirt (Mwah)
Nigga play with my people, I gotta get even
He might as well pick out a shirt (Yeah)
Like check this out, listen to me (Ayy, look)
That's where your picture gon' be (Hah)
They know I'm a dog and I'm off the leash
I flick off a bitch like a flea (Rrr)
You gotta get out of here, Jack (Get out)
See a broke ho and act like I'm blind (What you do?)
Georgia, Georgia, I cannot give you a dime
And not like Atlanta, I came out of Charlotte, you know that shit took me some time (Okay)
And I hold up the family, you wanna be me then you better go get on your grind (Yeah)
What you gon' say at the Grammy's?
Shout out to God and my daughter and shout out my mom
And oh, yeah...

Bitch, it's DaBaby, what you heard about me? (What you heard?)
I put that nigga up, now niggas actin' nervous 'round me (Up)
I'm in the rental truck sticked up like Walker Texas Ranger (I got the sticks)
I'm on my grind like f**k a bitch, I get some pussy later

This pussy bitch done tried to bring the pussy to the table
Can't even get shit in your name, can't even get no cable (What the f**k?)
I was at the bottom when it rained, I held it down, no anchor (Yeah, yeah)
She did me wrong, sucked my dick and treat me like a stranger (Goddamn)
Ain't gotta get love from no bitch, I get love from my baby
If your boyfriend anything like daddy, nigga gettin' strangled (Play with my baby, nigga)

Bitch, it's DaBaby, what you heard about me? (What you heard?)
I put that nigga up, now niggas actin' nervous 'round me (Uh uh)
I'm in the rental truck sticked up like Walker Texas Ranger (I got the stick)
I'm on my grind like f**k a bitch, I get some pussy later (Huh, bitch) 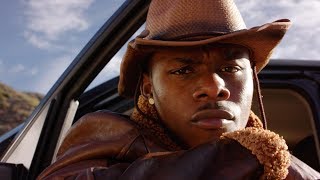