Awww yeah, uh huh, coming straight from the ghetto
Kicking some newness, Da King & I settin it off
My man face, Majesty, Izzy, you know what?
Ha ha, catch a vibe

How smooth can I get? As smooth as a jazz sax
What a class act, now you see why I'm Mr. All That
Pulling rhymes from the back of my dome
The texture of the lecture is then transferred into a poem
Your rhymes are so boring, I'm snoring
Leave me so sleepy Sonny Murdock wouldn't know it's morning
Here comes the negro, one out of two amigos
That's making the music leaving you hooked by the kilo
Talking loud and ain't saying nothin
Your styles are more shitty than buttf*cking
But I got styles for ???
Ever more deans, when I was nine I was a rough teen
Working hard for my assets so buy the cassette
And if you're Jamacian go get the cass-ette
Take it home and peep the hit
Word up, cause I flip the script, there it is

Ayo I write rhymes on the norm
You gotta have the mental uniform to decipher the cuniform
Cause I flip the script like no one
That's why I ain't suprised when I see rappers running like Jesse Owens
Running away from the habit cause they average
Me and Maj just gots more rap than Randy Savage
More traumatical or dramatical form or tragical Highly irrational for my capital
Style, be ruffing and cuffing you up for a while
Bust how, I'm stepping and busting your butt then I smile
Cause I'll, display at a rate of parlay, I'm sauve
And child, I'll groove and I'll prove that I'm smooth like Parkay
Margarine or butter, I'm larger than your mother
I've slain your crew so now I'm fathering another
Now how's that for negative encouragement?
Nourishment is what I dish out, you can't miss out
On adventure, or a storyline
I'm Fantastic like the Four when it's clobbering time
Peep the skills, those that try to get it are sweated cause it's hectic
When I flip the script like this

Yo I flip the script like no one else
While others rhyming pretty like a ??? elf
And if you go try to diss me, I wouldn't care
Because you niggas on my dick like pubic hair
I come correct because I have to
Ayo my name ain't Johnny but I'd like to make some Cash, too
I've been rhyming long enough for free without fee
So where is it, G, cause I flipped the script

Yeah, you don't stop, keeping it on
We just flipped the script, my man Face, Izzy, Majesty
Signing out, you know we got it going on
Yo fade me, peace
Explain lyrics
Correct lyrics 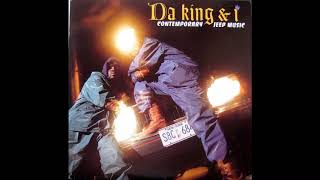