B'woy, if yah see the remnant of sufferation and disgrace
Where the English government left inna Africa- dog b'woy
Them have no respect for the people and act and a come g'waan like them decent
It was way down in West Africa, way down in the slave country
I took a walk, I took a walk down in West Africa
Down in West Africa
And there I found myself taking a short stop
Way down in Ghana
To tell them that me on ya
Then after I took a rest I took a walk
Way over to Cape Coast slave dungeon
To see what was happening (Hear what the song say)
Equal rights and justice stand for all
Them a preach upstairs rights from downstairs (Lord have mercy)
Them rip up creation
Slave trade continue until I found myself way over in
Sierra Leone
At the foot of Lion Mountain
It was around about Christmastime
Then I stop to have a drink of palm wine
But one thing- them want the people live like swine
They gave guns and bullets to the rebels and start to teach them to fight each other for iamond
It was a diamond war (Yet for whom?)
And all because there was nothing to gain
I've never seen the United Nation cry peace again
So you nuh see the corruption (and I look at you)
Out of the woodland
Man a nah nuh fight none
Stretch out your hand, put it out yourself
What do you want? Long sleeve or short sleeve?
And them a take them cutlass and them chop it off
(your request now)
Long sleeve them chop you on the wrist
Short sleeve them a cut it to the arm
We have everything in paradise (my God)
Here in the West
Even them Christmastime them song like a Christmastime without light!!
From the woodland
Just the sound of a bird.
When I woke up in my lonely cottage, listening to the song of each thing
And every man them a fight it don't know who is gonna win
War in a Africa
But it is extra slaughter there in Sierra Leone
One president fall down 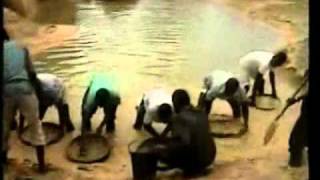 check amazon for War In Sierra Leone mp3 download
these lyrics are submitted by kaan
browse other artists under C:C2C3C4C5C6C7C8C9C10