Each day he become less clear in his mind
The mission, the crew, the growing suspicion with the passing of time
He'd talk to himself in his room
"All this talking - you boys talk too much
Now get out of my room
And stop talking to me about luck
There is no luck
I paid all the way, did it all my way
With hard work and pluck"
Well he was busy on the larder working on the lock
When somebody shouted "rock"
"Paper" shouted another"
"What I'm no p-pauper" sang Queeg
"So stop trying to read into me
There's noting to read, nothing to see
So just you make some haste
And summon up some speed
Let's pull into the place
And be done with the deed
There's somebody there who must pay
They chartered this boat"
It sailed on their say-so"
A year to the day into that bay
Young Uncle staggered up the gangplank to meet them
Said "stay"
"Is this the bride ship to the Free World, yes
Is this the bride ship to the Free World, yes
Yes I'll pay, I'll pay"

In his minds eye old Queeg opened his presents
Though the great day had not yet arrived
She arrived, one Hong Kong wise woman, the bride
A handful of ribbons by her side
He prodded her belly - gently
Opened her mouth and counted - closely
The teeth in her mouth arranged - loosely
"One, two, three, four,
Well it's not by teeth that they'll be paying
Nor by weight or by weighing
Now what is your name
The name that I gave you
"It's Freedom" she spat back
And I fought hard for this place
I want to be paid well for my time
I want, I want, I want what's mine" "Soon, soon" says Queeg to himself
Then turned to freedom and said "Freedom"
"Yes"
"Freedom this really is a stroke of luck
Because we've been looking for freedom
Now here's a bucket and a mop
So clean yourself up
And show us what you've got
Cause you're freedoms bride today
In the space of freedom today
Now just you slip away and slip along
And it won't be long we won't be long"

Well Queeg and all his crew bid farewell to the bride
The wedding-dress and cake though unused
Were laid out upon the mattress now called bed
The price in this price less land
As decoration was sown into the trail
Two Indians, a horse, a nail
"Don't forget who paid or who was for sale
Never forget the moral or who paved the trail
Cinderella all dressed up in your shiny gold shoes
You're out of sight, You're out of sight
Another drifting cinder come to ground
Another lucky winner you've been found
If you don't win you surely lose
Don't lose
Don't lose
Is this,
IS THIS THE BRIDE SHIP TO THE FREE WORLD? 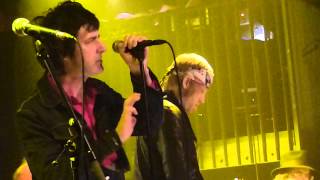