Played near a grave

Sentries and gentry, afforded the bloom
Of a red setting sun and a bloodletting moon
Applauded, then accorded them
Portents of doom

Where the list of sins
Grew beyond fable
They now roared abroad, restless with debauch

Satanic, enigmatic
His black magic was ecstatic
Megalomanic in titanic displays
Dressed in the best
Wicked britches of the West
He cut a mourning figure in a glorious swathe

A curse upon
This tragic kingdom

Blanchet, a priest, his book of lies
Exonerated him from Giles crimes
Announced his fears, one night of sighs
A night for cursing nursery rhymes
In the light of fire wrestling feckless shadows

(the tracks get blacker for this tragic kingdom)

Gilles frightening wealth, his tightening grip
On the weak and the rubies that his coffers let slip
Steered to near runin in succesive years
Of the most of excess and the best of it here
In the light of the fire wrestling reckless shadows 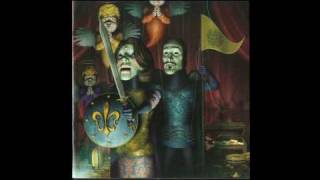 check amazon for Tragic Kingdom mp3 download
browse other artists under C:C2C3C4C5C6C7C8
Songwriter(s): Paul James Allender, Mark Newby-Robson, Martin Skaroupka, Daniel Lloyd Davey, Charles Hedger, Dave Pybus
Publisher(s): Cradle Of Filth Music Limited
Record Label(s): 2008 The All Blacks B V Issued under license to Roadrunner Records from The All Blacks B V Roadrunner Records is a registered trademark of The All B
Official lyrics by