To some it's just an emblem a formality.
It's a symbol that's been used so frequently.
Many blaspheme and despise.
Though it's ancient, it abides.
A shrine to death that stands for life to me.

There was a cross made for the Son of God at Calvary.
Two pieces of rough timber on a hill.
Through His hands and through His feet,
He took the nails for you and me.
Angels watched as He died for the lost. Though He could have walked away He chose the cross.

You see why this old emblem is so dear to me.
It stood for suffering, yet it brought us peace.
It bridged the gap for me.
Offered cleansing for our sins.
An icon that reminds us that we're free.

God forbid that I should ever let my memory fade.
But forever keep the cross in view for that's where I was saved. 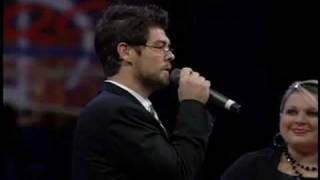