Just an average girl
She always wore a smile
She was cheerful and happy for a short while
Now she's older, things are getting colder
Life's not what she thought, she wishes someone had told her
She told you she was down, you let it slip by
So from then on she kept it on the inside

She told herself she was alright
But she was telling white lies
Can't you tell? Look at her dull eyes
Tried to stop herself from crying almost every night
But she knew there was no chance of feeling alright
Summer came by, all she wore was long sleeves
'Cause those cuts on her wrists were bleeding through you see

She knew she was depressed, didn't want to admit it
Didn't think she fit it, everyone seemed to miss it
She carried on like a soldier with a battle wound
Bleeding out from every cut her body consumed
She had no friends at school, all alone she sat
And if someone were to notice she would blame the cat

But those cuts on her wrist, they were no mistake
But no one cared enough to save her from this self hate
Things were going down, never really up
And here she is now stuck in this stupid rut
She knew exactly what she had to do next
Just stand on that chair and tie the rope around her neck

She wrote a letter with her hands shaking wild
"Look at me now, are you proud of your precious child?"
But she knew that her parents weren't the ones to blame
It was the world that should bow down it's head in shame
She stood up on the chair and looked out at the moon
Just don't think, it'll all be over soon
The chair fell down as she took her final breath
It's all over, all gone, now she's greeting death

Her Mum walks in, she falls down to the floor
And now nothing can take back what she just saw
The little girl that she raised is just hanging there Her body's pale and her face is violently bare
She sees the note and unfolds it with care
All she does is stare, "How can this be fair?"
She starts reading as the tears roll down her face

"I'm sorry Mum but this world is just not my place
I've tried for so long to fix this and fit in
I've come to realize this world's full of sin
There's nothing for me here, I'm just a waste of space
I've got no reason to stay here with this awful race
It's a disgrace, I was misplaced
Born in the wrong time, and in the wrong place

It's okay though, 'cause you'll see me soon
You'll know when your time has come, just look at the moon
As it shines bright, throughout the night
And remember everyone's facing their own fight
But I can't deal with the pain, I'm not a fighter
You'll make it through the night, just hug your pillow tighter
So let the world know, that I died in vein
Because the world around me, is the one to blame

And I know in a year, you'll forget I'm gone
'Cause I'm not really something to be dwelled on
That's what they use to tell me, all those kids at school
So I'm going by the law majority rules
My presence on this earth is not needed any longer
And if anything, I hope this makes you stronger
You're the best friend, that I ever had
Such a shame I had to make you so very sad

But just remember that you meant everything to me
And to my heart, you're the only one that held the key
Now it's time to go, I'm running out of space to write
And yes I lost my fight, but please just hold on tight
I'm watching over you, from the clouds above
And sending down the purest and whitest dove
To watch over you, and be my helpful eye
So this is it world,
“Goodbye." 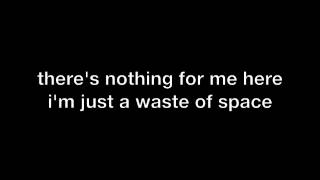