[Boots]
Ahhhhhhh yesss, ah-heh
Tell me somethin
Were you, about to make a decision?
Was it, one of... THOSE decisions?
Ya know, when ya, gotta decide, between
what's good, for you, and what's good, for the struggle
Well before you sellout, The Coup wants to tell you a lil' story
E-Roc, kick it

[E-Roc]
Pressure, is gettin to my dome
See, I need some food for my little boy's tummy
Pulled up a chair just to think about my situation
Don't have a job, cause jackin is the occupation
f**k THE SYSTEM, you know that it's all wrong
I got my gauge, yeah now my mission's on
Checked on my baby, good he was sound asleep
Cause money was my thoughts as I began to creep
down the street the corner sto', was on my mind
Freeze! with the sounds of clips was in my behind
I turned around but befo' I could pull my trigger
in they ass, on the ground, laid another nigga
I was trippin, slippin labelled as a dummy
But can you blame me, I did it for da mo-ah-money

[E-Roc]
Back on the streets I thought I wouldn't survive
So I'm bustin my ass on this nine to five
Flippin patties all day when the place is hot
Gettin paid peanuts, in the burger shop
Now everybody wants to know the deal, is this brother real
can I feed my family off of a Happy Meal?
I had to stop cause this shit ain't for E-Roc
I threw down my time card and started slangin rocks
For a brother dis is some'in you can't beat
My cash is flowin, now I'm bringin home the meat
I'm feelin good sellin crack to a fiend
Don't give a f**k about his luck, ya know what I mean?
People trip, but they don't understand that
a devil's land, ain't no black foe a black man
Now it's a shame, but who's to blame?
I got a baby with a life and no future to gain, yeah the money

[E-Roc]
I remember the time when I was six
The American Dream was everybody gets, rich
But yo, a fact for all to know
Four hundred years has passed, and we still po'
He ain't my Uncle, but Sam know what he's talkin about
If you wanna get paid, sell your people out
But not me I'd rather do a crime
Deep in my rhyme; is it better for a black man to do time?
To the red white and blue I don't give a f**k
Because I live and die, just to make a buck
So I'm that mother-f**ker
That rob his daddy, and threw his ass in the gutter
And I'm that fool
that sold his kids cocaine at school
But Jack's an attorney
So I'ma do what I do, cause he's makin all the motherf**kin...
*gun shots* 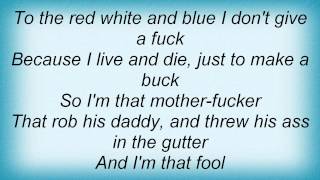