Eagle On A Pole Lyrics

Eagle On A Pole Lyrics


Saw an eagle on a pole,
'Think it was an eagle.
Watched its' shadow fly 'cross the cement.
And I woke up in the snow,
all the trees, and crowds, and people.
No shirt, no shoes, no idea where they went.

I followed the fence line thin,
back where the yard begins
My woman, she stood crying like a man.
Said, where have you been?
Where have you been?
I thought you said that all of that was done.
El Cielo es azul,
Just don't go telling everyone

Thought the kettle was a train.
Thought that Monday was a door frame.
I tried so hard to finally settle down.
Heard the fire pop and snap.
Like a tack piano rag.
I never could get used to happy sounds.

But I hope the world's exposed. A cruel and elaborate hoax,
That convinces me to walk without a cane.
But what can you do?
What can you do?
I always heard that what is done is done.
El Cielo es azul,
Just don't go telling everyone

The past don't ever quit.
There's boxes in the attic.
Baby shoes and taxidermy dreams.
While the ashes of the dead, like a dandelion head,
explode and then are scattered by the breeze.
And its such a long way back to all the fun I had.
When nothing ever seemed to bother me.
But what can you do?
Child, what can you do?
Sleep 'neath the stars, and toil in the sun. 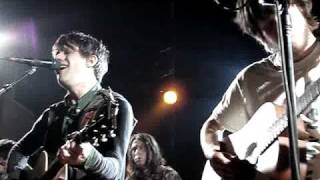