Norman the Mormon hears the doorbell ring
But inside they're not answering
Peering through the window, to his surprise
The door flies open, "Come inside"
"I am Jason, the Freemason, what you're selling, I do not need
Mr. Patrick, orthodox Catholic, is more likely in your league"

At that very moment Mr. Softee rings his bells
Ding-a-ling ding-a-ling
Quickly thereafter, Choco-Taco delight
While reclining on his brand new mountain bike
Now watch you most closely, for here the plot does twist
Enter Simon, the super Scientologist

"I'm opining sailing Simon, is you stupid or is you just high?
Mother Hubbard got me covered like Sarah Lee on her cherry pie"
Norman says to Simon, "Hey, if there are really aliens
I would think that L. Ron Hubbard would have to be one of them"

At that very moment Mr.Softee rings his bells
So before Simon could bring his crushing blow
Norman raises his hands, "Oh no, oh no"
Simon says, "Hey, we ain't even finished this"
Norman says, "Yes we have, here come them Witnesses" 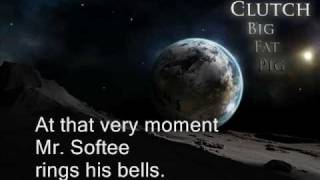