Jenny left from Idaho and made her home in Capitol Hill

And he traded it for sea level, for misty rain, what a bitter compromise

Who had nowhere to go

But most don’t belong here
We’re all running away

And we’ll drain you dry of all semblance of life
We don’t give we just take, take, take But this city has no Bible
There’s no meaning you can use
We’re all desperately searching for truth
We’re a city of orphans

Who had no place to go

Where did our fathers go

But there are no answers
On the tables of oak

We’re a city of orphans
What do we do to ourselves?

Jenny left from Idaho and made her home in Capitol Hill 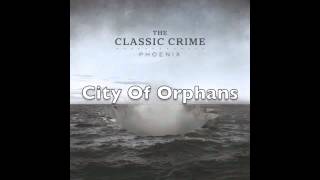 check amazon for City Of Orphans mp3 download
these lyrics are submitted by musixmatch2
browse other artists under C:C2C3C4C5C6C7C8C9C10
Record Label(s): 2012 The Classic Crime
Official lyrics by