Times Change - Bosses Don't
Things were rather different in Great Grandfather's day
He just put a chain around their ankles and made them work for no pay
He took everything they owned and yet still demanded more
He did a bloody good job in taming the poor
Now I'm rather more subtle, I say "I'll tell you what I'll do -
I'll do everything I can to try and help you
And you'll be helping me," I say, "I'll see that you're alright
You can have a place of your won, you can even pretend to be white.
And you won't have to wrry, I'll have a quiet word with your mates
Oh they'll be alright, they'll have enough on their plates
I'll put a bit in their mouths; you just pull hard on the reins
They'll do anything for you and they won't complain... You'll be so much better off," I say, "You can share my paradise
Just sign my piece of paper and I'll organise your life."
And it never fails, it does the trick, it works every time
So me and my dear wife and the family's doing fine
Great Grandad got his Dukedom when slavery was abolished
Dead old dad became a Viscount when the Empire was finished
But times have changed, and for the better, with freedom of choice -
We're a thousand times richer, QED His Master's Voice
What could be worse than under the fist of this white man, and
pay him to oppress you? The answer is to live under the fist of the black
man who is living under the fist of the white man; and such was, and still is,
the sotry of African women.
Explain lyrics
Correct lyrics 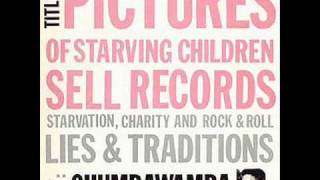