It's easy to love the people who are standing hard and fast
Pressing on to meet that higher calling
But the ones who might be struggling, we tend to judge too harshly
And refuse to try and catch them when they're falling
We put people into boxes and we draw our hard conclusions
And when they do the things we know they should not do
We sometimes write them off as hopeless
And we throw them to the dogs
Our compassion and forgiveness sometimes seem in short supply
So I say...

We can love them and forgive them
When their sin does not exceed our own
For we too have been down bumpy roads before
But when they commit offenses outside the boundaries we have set We judge them in a word and we turn them out,
And we close the door
Myself I've been forgiven for so many awful things
I've been cleansed and washed and bathed so many times
That when I see a brother who has fallen from the way
I just can't find the license to convict him of his crimes
So I say...

That doesn't mean we turn our heads when we see a brother sin
And pretend that what he's doing is all right
But we must help him see his error, we must lead him to repent
Cry with those who cry, but bring their deeds into the light
For it's the sick that need the doctor,
And it's the lame that need the crutch
It's the prodigal who needs the loving hand
For a man who's in despair, there should be
Kindness from his friends
'Lest he should forsake the fear of almighty God
And turn away from God and man
So I say... 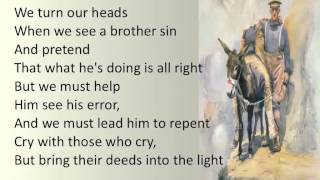