[Verse 1: Jarren Benton]
Yeah n***a, oh no, in a Ford Loco
Who you getting crazy with, ese? You know I'm loco
Headbutting hoes like I'm ocho (cinco)
I be in the valley with the stoners and the cholos
N****s stacking more dough, you know how that s**t go
You should get a tan, get your dollars, take a photo
My cologne say Versace, my d**k say blow me
My drawers say polo, yeah b***h polo
Need a white girl with an a** like Coco's
Hit that p***y right, girl I bought you some Menolo's
That was Adderall, s**t, I used to pop Nodoz
Used to have one b***h, now I got four hoes
Hi my name is Jarren, I am not normal
That p***y, hit it like porno
Mr. Drummond
Skeeted in her face, I treat that b***h just like a urinal
Webby tell these hating n****s slit they wrist
Every track we on we take a s**t on it
Ladies show your t***, meet a n***a back stage
Where you'll see me pull my d**k out and lick on it
Me and Webby hurting and we murdering any m**********r that's looking at us sideways
Cut the body five ways, we skin em and drop em off at the highway
P***y a** n****s so irate, we got em screaming

[Verse 2: Tech N9ne]
I was sick of demolishing, decapitate whoever thinking they killing
Doing the hottest three activated
Murdering many men that's making

Better bow before Nina, don't even try to spit at the great
Sick, then I'ma get pissed
B***h, get on my d**k quick, give it a lick it, acclimate
Get what you're giving, get with the gift and go gravitate
Acting a ape, I ate up a animal I aggravate
Whole lotta people getting a whiff of the Niner
They loving a n***a cause I'm a hell of a rhymer
Women are looking finer, I never decline her
She wanna climb my timer, stick it in her slimer
I get the pudding, never gotta wine and dine her
Broken heart get a shiner
When it comes to murking on music I'm a deadly designer I'm drinking my Hennessy mixture out of a Steiner
If you tripping on my bucker I'ma cut a n***a up with a machete
Cause I'm running with a gang that'll bring that flame with a thang and it's heavy
You don't wanna f**k with a Tech N9ne or my n***a jb or Chris Webby
Having everybody saying "oh no"
Bustin up the window of a 6 Chevy

[Bridge: Chris Webby]
We don't fight fair, we right here
We the reason you've been waking up with nightmares
Got em running, got em running
From the second they see us coming, I got em saying

[Verse 3: Chris Webby]
Hold up. On your mark, ready, set, go
Look at Web flow
I be jabbing with the right and then I hit em with a left blow
Knock em back in time like they chilling with Bill and Ted, yo
To a land before time, T-Rex ho
So many bars you would think I'm living on Death Row
Webby's just a motherf*cking dog, where's Petco?
Followed a plate of kibbles n bits with an egg roll
Genius in the laboratory cooking blue meth, yo
Call me Heisenberg, cause when I rhyme with words
These motherf*ckers are behind the curve
I drive and swerve, turn and I ride the curve
And hit every pedestrian that doesn't find the nerve
To get out of the way, "Karen did you see that shit?"
Yeah maybe you should drive, cause the weed I hit
Got me feeling so loco, la vida, b***h
Why you even pass me that s**t?
But f**k it man I'm an animal, but you never seen my species
Brand new breed they discovered in ct
Homegrown b***h, yelling "feed me, feed me"
And every listener is pressing repeat
B***h I got a sick mind, stomach bug and a brain
Insane, you gotta keep me handcuffed with a chain
But I'll still break out like Burt Wonderstone
So anytime you see me coming, yo, I got em yelling out 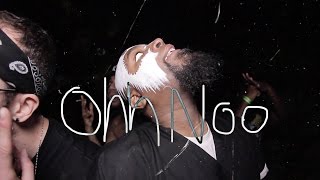