[Hook: Chris Brown]
We poppin' like ayo
All my bitches got real hair chilling with the top down
Screaming like ayo
I'mma take her ass down when she bring her friend around
Poppin' booty like ayo
I'm a boogie ass nigga left the roof at home
We popping like ayo, ayo, ayo
But don't be acting like I need you

[Verse 1: Tyga]
Ahhh! Aye babe this my new shit
I'm the black Richie Rich with the roof missing
If it don't make dollars it don't make sense
Z, wake up like I gotta get it
And I got a engine with a trunk space
I get money three ways, f*cking bitches three ways
7 different foreigns plus she no hablé
But I make that bitch walk with some cheesecake
Yeah, I'm the coldest nigga, icy
Looking in the mirror like I wish I could be me
She too into me, I'm more into money
My hobby's her body, that p*ssy's my lobby
I'mma eat it, I'mma eat it
I don't lie, hold my dick, too conceited
Uh, told her she's my wife for the weekend
But don't be acting like I need you cause we poppin' like

[Verse 2: Chris Brown]
I'm in a Rolls, you don't roll right
My chain shine brighter than a strobe light
I'm tryna f*ck Coco, this don't concern Ice If I motorboat, she gon' motorbike
A nigga ain't worried about nothin'
Rehabilitation just had me worried about f*cking
Money, decision-making only worried about stunting
She worried about me, her nigga worried about cuffing
I wanna see her body (bodyyyy)
She said get inside of me
I wanna feel you baby (yeahhh)
Just bring the animal right out of me
We loving, she love it
See when I go down on her
Now we f*cking, she thugging
Getting loud (cause we poppin' like)

[Verse 3: Chris Brown & (Tyga)]
Huh, look, alright
Now I can spot your bitch from a mile away
Valentine in that p*ssy, it's a holiday
(Uh, you losing money, I windmills Dr. J
She going to follow my lead, Simon Says)
Paper, paper, I'm riding scrapers in California
Car smelling like ammonia, we got that stank on us
(Never been an outcast that stank on ya
From the ghetto but my bitch like Apollonia)
We in the hood, tatted like a Mexican
Car too fast, give a f*ck about pedestrians
(And my section less niggas, more lesbians)
Got your bitch, I'm that nigga
(Yeah we poppin' like) 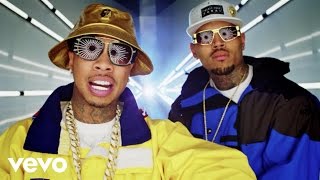