[Verse 1: Chip]
Look, straight bars, no messing around
But picture me in the booth 2-stepping around
Shit, it's nearly 10 years I've been holding it down
You couldn't f*ck with me then, you can't f*ck with me now
I told God I wanna quit, my nigga wouldn't let me
16, my freestyles are legendary
They be like "Yo Chip, where's Ice Kid?"
I'm like "Blud, do I look like his secretary?"
Head top bars, no frisky flows
Chipmunk from the school of Risky Roadz
And your ballerina raps can't test the flow
With your ankles out, stay on your toes
I don't know how it feels to queue to rave
I've been popping since drinking underage
Me, I've got like 13 mixtapes, 2 albums, an EP
And I still got more to say
I've got bars for days, now who wants a page?
I can feel the eyes, yeah, they're all on me
For all the bad minds preeing, I got Lord's on me
So if you pull out your gun, it might strawberry (jam)
Positive energy, I'm throwing up a peace
But right now I'm in beef with this beat
So one time for New Machine but
I'mma punch it up to say the least
Like I was at Drake's show like, look at all these Drake hoes
Rap really has a payroll
25 sitting on 25 Ms?
25th's around the corner, where the f*ck is my pen?
Still telling every gyal "you are not my wifey"
Feeling myself, you ain't gotta like me
No hook, just verses on the beat
Make her drink off the flow, KA's still sweet, nigga, yeah

[Verse 2: Kano]
Huh, hit me
I'm feeling myself, I might strip me
f*ck it, done with the intro, let me indulge
If we're all stars then what's Ringo?
There's levels to this shit, no kettle on your wrist
Could get you on the list of legendary Brits
When you're buried under 6, what you think though?
Prince made Purple Rain, you made Vimto (watered)
Brushing my shoulders, no lint roll
It's nothing, switch up the flow and so seamless
We work harder than Hulk Hogan's seamstress
The three amigos, [?] finito
I ain't doing this shit to be T-To
B, I ain't featuring man to get me ghost
I've been getting fully paid to feed Rico (treason)
In our plate of the people, you're peak though (eating)
You'll see man on Barking Road chilling (true)
I'm from round here, so who's slipping? (you) Chick on the red, still I'm cripping (Snoop)
I ain't got two chains but I'm different
Yankees on a flossing ting
My man take your confidence for cockiness
Cause these niggas don't scrap, that's rocky shit
Red dot on your chest, no poppy shit
I stay anonymous rolling with the commoners
Two pints of lager and some pomme frites
But every now and then, I pop a couple Bollingers
Act up in the week, weekend's the omnibus
Then watch Bartholomew's
Chip call me uncle
Something like Reg and his nephew, we'll trunk you
Leave man dizzy when we spin you like Rambo, kick it like kung fu
Snare better back that shit
Cause when Wretch grabs this
It's a rassclart madness

[Verse 3: Wretch 32]
Mum told me "f*ck the game, give me some grandkids"
Told her that I'm match fit, already on a hat trick
Nearly, I dropped the ball about one time
And it's not my fault that the lady didn't catch it
Scary like the movie, but nothing like a movie
Cuh this nigga don't die, no one doesn't wanna shoot me
I've been rolling with my boys through my hood without my hoodie
And they're saying I'm on sniff, I ain't even on a zoobie
Me and Kane go back from when I was selling goodies
Me and Chip go back from when I was robbing bookies
I bet you wouldn't bet that
Ain't never hide problems when we really got the cookie
Two shots for my niggas in the pen
Because of my pen, I can buy my niggas shots
I can buy food for everyone in my circle
But how we ever gonna think out the box?
I remember when me and Z got raided
Had the same look on his face when I got famous
Oh, happy days playing 2Pac - Changes
In my boxed room, now the Porsche all spacious
Uh, rolling around with new Roleys on
On an island getting my Stony on
Uh, didn't sleep, getting my lonely on
I done transformed from MC to Wretchatron
I'm a beast with it
I'm Great Britain off the leash with it
Or Great Britain in my piece, init
If you're gonna do the rap, get the meat with it
Yeah, I say nice to meet ya when I leave ya
Cause I wanna go, she want a Visa
See, I'm [?] speaker
Me, Chip and K, this is ether

[Outro: Wretch 32]
How much we sold between us again? 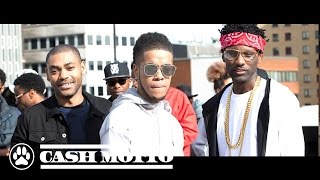