One time I was at the beach
And we were looking at the stars
And this girl was laying next to me
And the blanket that we had was, had stars on it as well
It looked liked we were just floating in an abyss
Honestly, when I see her face I just smile I guess
I mean, our cars came and the lights were on them so we could see what the waves look like
I'll be waiting here on the sand
I remember that first night you were wearing a power ranger black T-shirt
So was I, a different color, so was Moey and his brother
Not as pure, so insecure
The times have changed
But really we just looked up at the stars
For a couple hours, turned off all the lights on the cars
The world was ours it was, yours
It was mine
The time flew by like it was prime time and I'm inside of
Life, you shouldn't be my wife you should just be with me on this beautiful night
Maybe we can make things right
Maybe we can do it without any spite
It's just for tonight, and we hope it doesn't end
So we drive back to our homes chilling with our friends

[Bridge: Childish Gambino]
I guess this ending's the best for me
But I can't leave you behind
You know that I never wanted to see what's on your mind

[Outro:]
Goddamn, Goddamn
Yo it's kinda hard not to like, get f*****g cheesy on this s**t
But, does that even matter?
You know what I'm saying, juxtaposition man, juxta f*****g position
My n***a Jaden Smith dropping jewels and n****s don't believe him cause he's Jaden Smith but
It's all about packaging right?
Real s**t though, good and bad is all relative man
It really is, a lot of n****s is sheep
We don't even know what we like anymore we just know what the most hype is s**t
Do you really like that s**t you like?
Or you like the way they gave it to you?
You know what I'm saying? Pepsi, Coca-Cola same thing
Dave Chapelle said that, the one that taste the best was the one that was paying him the most at the time
That's all that happens with us man, we some weak n****s man all of us
Followers, sheeps, plural made that s**t up
Apology ain't no real word my n***a
We know this, but he knows more cause he broke the rules that don't even f*****g exist man
Funny thing is man is like, as a futurist, and I can call myself a futurist
Nobody is even going to give a f**k until I'm gone
So does it even matter?
Yes it does 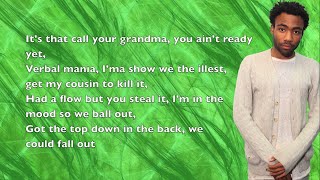