Should I Kneel Or Should I Stand? Lyrics

Should I Kneel Or Should I Stand? Lyrics


Friday morning, got a big game tonight
He's the high school quarterback of his football team
But he's been up late with some things on his mind
So he call his grandpa and share what he's been wondering

"Grandpa, I don't wanna make you mad
But tonight during the anthem, I don't know if I'll stand
I'd still think of those who've died and served
But if I don't take a knee, I know my team will be hurt"
(I don't know)
Should I kneel or should I stand?
And he said

Just as long as you're holding somebody's hand
Cause after all the noise we'll still be, all in this together
And yes, that flag mean's a lont of things, but will you mean to make it better?

Some yegarts have passed, he's found the love of his life
Thinkin' that it's time to ask her: You will marry with me?
He's so nervous wondering how she'll reply
So he hops on the phone and gives his grandpa a ring

Grandpa, I just don't know what I should do
Will I say the right things?
Will I make the right moves?
I just wanna be the best for her life She's perfect for mine I've gotta make her my wife

Should I kneel or should I stand?
And he said

Just as long as you take her by the hand
'Cause after all the crying you two will be, all in this together
And yes, that ring mean's a lont of things, make it mean those things forever

White picket fence, two boys, a dog and a home
But grandpa getting sick was never part of the plan
Sleeps next to grandpa so he won't be alone
Grandpa call his over, he keels down and takes his hands

Hey look at you, this time you didn't even ask
You normally never know, if you should kneel or should stand
With his hands in his and tears in his eyes
Says: Look at this here moment, you've done everything right

Then he squeezed his grandson's hands and said

Make sure those boys of yours, they always understand
After all the nonsense life may bring, we're all in this together
And I'll leave this world as happy as can be
Knowing those boys will learn a thing from me
Every time you teach them love
Explain lyrics
Correct lyrics 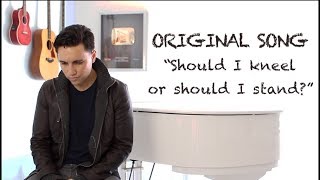 check amazon for Should I Kneel Or Should I Stand? mp3 download
these lyrics are submitted by itunes3
browse other artists under C:C2C3C4C5C6C7C8C9C10