TC: Oh, yeah, man. I played with those dudes, man.

TC: Yeah, last year at the Philmore, man. Me and the base player sat in, man.

TM: Yeah, well, I'm not from here, man. Like, I'm from Pittsburgh, man. I
Don't know to many local dudes.

Once upon a time, about, hmmm, five years ago, there was this groovy dude
And has name was Santa Claus, y'know? And he used to live over in the
Projects with his old lady, and they had a pretty good thing together
Because his old lady was really fine, and she could cook and all that
Stuff like that, y'know. Like, she made da best brownies in town, man!
Oh, I could remember 'em now, man. I could eat ONE of 'em, man...

TC: Wow, did you know these people, man?

CM: Oh, yeah, man. They used to live next door to me, y'know...until they
Got kicked out, man.

TC: Wha? They got kicked out of the projects, man?

CM: Yeah, you what happened, man? They used ta live with all these midgets,
Y'know, and da midgets used ta make a lot noise, y'know, like pounding and
Hammering and pounding all night, man...

CM: Oh, yeah, man, they were REALLY freaks, man. As a matter of fact, they
All moved up north together, y'know.

TC: Oh, they had to go get their head together, man?

CM: Yeah, get their head together. And they started a commune, y'know. It
Was called the...uh..."Santa Claus and his Old Lady Commune"; it was a
Real famous one up there, man. And they used to sit around and groove
All the time, y'know.

CM: Yeah, they eat da brownies, man, and they drink da tea, man...and what
They did most of da time, though, was make a lotta goodies, y'know? And
They had everything they needed; they only needed to come into town
Maybe once year or something like that...

TC: To pick up the welfare check and the food stamps, right.

CM: Yeah, man. No, no, what they did, man, is that, once a year, when they
Made all the goodies, y'know, they used ta put 'em in a big chopping bag
And, then, they used ta take da chopping bag and give 'em to all the
Boys and girls all da way around da world, man!

CM: Oh, yeah, they were really nice people man. And so much class, man...
They had so much class, y'know. Like, give or take da way they used ta
Deliver da toys, y'know. It's, like, Santa Claus used ta have this
Really charp chort, man, y'know? It was lower to da ground, had twice-
Pipes, candy-apple red and button top. Oooo, clean! TC: Hey, that sounds like a hip snowmobile, man.

CM: No, no, it wasn't a snowmobile; it was a sled, y'know. One of those big
Sleds, y'know? And he used ta have it pulled by some reindeers, y'know,
Like, reindeers?

CM: Some reindeers, y'know. He used ta hook them onto da sled, and then he
Used ta stand up inside da sled and hold on to da reins, and then call
Out their names, like, "On, Donner! On, Blitzen! On, Chewy! On, Tavo!
C'mon, Becto!" And then, the reindeers used ta take off into da sky and
Fly across da sky, man!

CM: Yeah! And then, when they flied across da sky, they used ta come down to
Place like, oh, Chicago, L.A., Nueva York and Pacoima and all those
Places, y'know, and then land on top of people's roofs, and then 'ol Santa
Claus would make himself real small, y'know, like, a real small guy, and
He'd come down da chimney and then he would give you all da stuff that he
Made, man. And...dig this, man...he did it all in one night, man!

TC: And this would get the reindeer off, man?

CM: Oh, man, he doesn't do that bit anymore, man. It got too dangerous, man.

CM: Yeah, lemme tell ya, it sure was, man. Like just two years ago, man, he
Got stopped at the border, y'know, and they took him into another room
And took off his clothes, man, and searched him and searched his bag of
Goodies, man...and then, when he was leaving, man, he was flying through
The air and somebody took a chot and his reindeer, y'know.

CM: Yeah, it really was, man. And then, man, he went down south, man, and
They tried to cut of his hair and his beard, man. And all the time, he
Was getting stopped and pulled over and asked for his ID, man....just
Everywhere he went, he ran into too much recession, man.

TC: No, man, you mean he ran into too much REPRESSION, man.

TC: Yeah, man. But, it's a drag, man, 'cause we could sure use a dude like
That right now.

CM: Yeah, but he comes in disguises now...

CM: Yeah. But you ought to see his disguise; nobody would ever know it was
Him, man.

CM: Yeah. He's gotta job in front of da department store, ringing this bell
And playing this tambourine next to this black pot, y'know?

CM: YEAH! You know who I'm talking about, man!

TC: Yeah, we played in front of a store, man! We made a lot of bread, man!

TC: No, but I played with THIS dude, man. 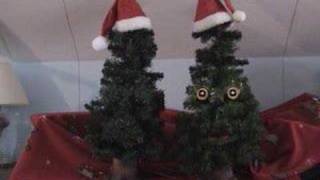