Damn, forgot to do something
Oh yeah, it ain't over, motherf*ckers

Could it be they don't really know me?
I don't care, f*ck you, blow me, I'mma get it right for the show me
Can't nobody call me out, I'm a vet' round here
Y'all stuck in the middle like Monie
Cut with a roney, up to my neck in a POW full of vixens sucking up on me
f*ckin' her face like I love that bitch, but I won't ever let one control me
f*ck with it Bro B, look, I'mma luncheon, ridin' on the back of a one-trick-pony
Back in the function, lightin' the stage on fire, now look at me like a phony
Hooked I'm an only child and I give two shits if a bitch wanna round up on me
You can lick my asshole but do not pass go, gotta pay me what you owe me
Wait for the warning I'm alarming 'em all
You finna get mauled outside of the mini-mall
And admit it we are all literally raw, y'all Mitch Bade with a thong and a bra
Better call the law, the snake and the bat in the building
Swildin' I'm stackin' a million, crackin' a couple of cases smokin'
A freshy facin' the f*ckin' ceiling, chillin'

Huh, uh, huh
I'm about to act in my faith so I rap in the game and the game
Mean we back with the fame like a slap in the face
It's strange, how I laugh at the pain get to tappin' your brakes
Need a couple rack in the safe I'm stacking the cake I play for
The bat and the snake never wanna bomb jack in my rates
I train in the trap, livin' in a maze
No map now I'm runnin' like a rat in a race
I happen to know, many men who rap to my soul
Man you dunno the half of the hole
I chill in the class on my own
I ain't feelin where you at and it feel like Attack of the Clones
Can't tell the weird from the whack, skill from the flash
Jill from the Jack from the Joe, I act on my own, after the throne
Come up out of my chair, the gat to your dome
Pass me the dro on my left hand side
No captain and coke I'mma let that ride
Wrapped in a robe, Jedi Knight
Better bust on the mic with deadeye sight
I'm back in the zone like I never had left it
Somebody show me which crew better than Ces is I don't know why they ain't get em a necklace
Get 'em a world tour with a bed and a breakfast
Uh-hah

Once again the never ending (Kali)
I was offending rappers, over now they're bending
The death of hip hop open my mouth avenging
I'm way too clean, all of your styles are dingy
Never see me (No)
Even if you have me under a microscope, see my mic provokes 'em
A Twitter full of fans and you're by your lonesome
Get her, out of her pants and you know she wants some
Gimme, gimme, gimme, gimme
Your status ain't nothing more than a penny
Rap until my lungs is empty
Even Tecca Nina cannot pretend to be me
The wild in me or Goddy defend the UB
This is my duty to rock and then don't stop it then they interview me
Don't know me that ain't common cause I ain't a newbie
I'm a painter from anguish
You don't know, baby you ain't speakin my language
It's a done dealybob, a done dealrosky
Got a deal so you can't approach me
Hot so you never could roast me
So it ain't finished, finito until I say so brosky
So I clobber 'em when I'm coming I slobber 'em don't bother em, with garbage
This shit's over, but I feel like it barely started (Kali)

You need scheisse spray because my shit's makin' the flies split
So anybody that want it they're gonna die today
When the mic sits, upon my lips, it come a crisis, you better hide away
High pitch, you no like this, then it's bye bitch, don't even try to play
White Mike and it's Donnie, your life's a bitch
When it's Tecca Nina with them and then a Spider K
We groovy with a Caucasian and three mulies
Never disrespect us see toolies from Kali, Godi, Me, Ubi (Eh!)
Effortless I'm gonna change your brain
Bring every wicked bit of Strange to mainstream
Now my baby making thangs are hanging
Cause my type of insane we slanging
And you don't wanna wake up in the middle of killers a milli
Gonna rudder you up I feel up a butter my niggas
In a willing to buck with a villain a cutter
And you chilling with a pill in your gut
Oh and I wanna rock, nine mill I got
I'm in this, rhyming assault, shot when I call bubble
The way I'm livin' it ain't nothing subtle
And he just livin' in a f*cking hovel 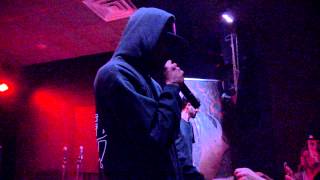