f*ckin' Inquisitors of Braunschweig
Were the most famous by their cruelty...
In the time of raving Inquisition
Triers from Braunschweig
Tormented and killed the Hennig Brabant
(who was the scholar of law)
This disgraceful murder
Was the most infamous act
In the history of Inquisition
(in the history of Vile Inquisition)
...One disastrous day of September, 1604,
Hennig Brabant writhed in pain and agonized
By "Rabid Jackals"...
"Qui habet aures audiendi, audiat!"
Unprecedented torture - In the name Of God Unprecedented torture - In the name of the Lord
Under the influence of torture
The scholar of law, Hennig Brabant
Confessed his "Hideous Sin":
The alliance with Satan
After this gory process,
On the seventeenth of September, 1604,
Terrible Occurences were started:
On the place of execution
The low scoundrels of Inquisition
Crushed the Brabant's chest
And ripped the belly of the half-dead man
Soon after the Bloodthirsty Executioner
Tore the heart of poor victim...
GOD REST HIS SOUL! 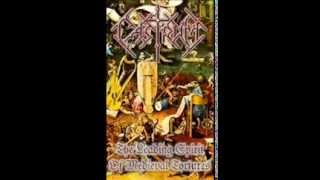