Sunday's On The Way Lyrics

Sunday's On The Way Lyrics


The demons where planning on having a party one night.
They got beer and Jack Daniels and pretzels,
a little Red wine, and some white.
They were celebrating how they crucified Christ, on that tree.
But Satan, the snake himself, wasn't so at ease.
He took his crooked finger and he dialed the phone by his bed,
To call an old faithful friend, to know for sure, that he was dead.

He said, "Grave, Grave tell, did my plan fail?"
Old Grave just lauged and said, "Oh man, the dude is dead as nails."

Chorus
Well hey, hey, hey on Friday Night, they crucified the Lord at Calvary,
But He said, "Don't dread, in three days, I'm gonna live again, you'll see."
When problems try to bury you and make it hard to pray,
It may seem like Friday night, but Sunday's on the way!

A tranquilizer and a horror flick could not calm Satan's fear.
So Saturday night, he calls up the grave...scared, of what he'd hear.
"Hey, Grave, what's goin' on?"
Grave said, "Man, you called me twice, and I'll tell you, once more again boss, the Jew's on ice!"

Devil said "Man grave, do you remember when old Lazurus was in his grave? You said everything's cool and four days later, BOOM, Ol' Lazurus, he was raised!
Now this Jesus, He is much more trouble than anyone has ever been to me.
And look Grave He's got old Devil shook cuz He said, He's only gonna be dead for three!"

Sunday morning Satan woke with a jump, ready to blow a fuse.
He was shaking from the tips of his pointed ears,
to the toes of his pointed shoes.
He said "Grave tell me is He alive? I don't want to lose my neck!"
Grave said, "Your evilness, maintain your cool. You are a wreck!"
Grave said, "Now just cool your jets, Big D, my sting is still intact,
You see, Jesus is dead forever, he ain't never coming back,
so just mellow out man, just go drink up or shoot up,
but just leave old Grave alone, and I'll catch you la.....
la....oh no! OH no! OH NO! OH NO....SOMEBODY'S MESSING WITH THE STONE!

Then the stone was rolled awa and it bounced a time or two,
and an Angel stepped inside and said, "I'm Gabriel, who're you?
And if you're wondering where the Lord is, at this very hour,
I'll tell you He's alive and well, with resurrsection power!" 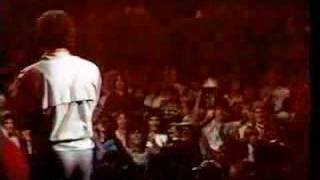