Now you must understand he made me a promise
there were secrets we shared we planted a tree
We lived in a cabin, I fished along side of him
I fell under the spell of his sorcery

When he cast me adrift at the end of the summer
It was not for another but his own privacy
I fell apart like a rose, but the scent of my longing
Remains and it weeps like an old willow tree

At night when it's still, with a yellow moon rising When his candle is snuffed and he's deep in a dream
I move like a cat, and crawl into his window
And lie down beside him in a golden moonbeam

The smell of his skin is just like the summer
When our love was as fresh as the grass in the fields
And ever so softly I kiss his eyelids
Before slipping away, my secret concealed

Though I'm in it alone, I'm still in it, In love
And love can be lonely like a sweet melody
But just maybe he feels like a whisper inside him
Like an angel beside him, keeping him company
Explain lyrics
Correct lyrics 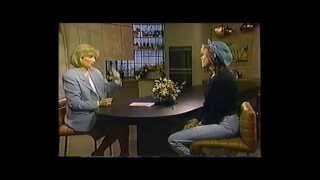