HOOK
Ain't shit change but the chain and the watch
We gon' make it rain, switch lanes in the drop
One red, one blue – like we came with the cops
Yeah it's going down, but we staying at the top

V1 (Cal)
They open up the door for me
Like it's a king coming through bitch
There's a whole lot more of us
Yeah that's my team coming through bitch
Creeping through the city in that matte black
Jaguar purring like a black cat
One of one bitch, you can't match that
She told me the money where you lack at
Scratch that, shorty hit the lotto
In the club pouring black Ace out a gold bottle
I ain't tryna be a role model
Everyday I do the same thing

V2 (Chris)
Ain't shit change but the chain and the watch
Since I got the fame, a better aim with the Gslock
Got your girl in the Range, another bitch in the drop
I'm bout to f*ck em both, anybody wanna watch?
In the White Ghost with the.40 Cal, me and Cal Bitches stripping cuz we tipping now, smoking with the windows down
I got a whole lotta guala
I'm throwing money up, I run you over with them Forgiatos
You know boy I'm getting paid, what you say? Money on the way
Bitches acting fake in my face, wanting a savior
OG, smoking OG, them bitches on me
Lonely, I'm big league, playing for the majors

V3 (Cal)
She can make it clap for me, but I ain't on the stage hoe
She tryna get a rack from me, but I ain't one to save hoes
Cuz these bitches off, I ain't cuffing
I can make her top drop, I ain't have to press a button
But she only see the crib if she f*cking
If she bring her friend too, I ain't worried bout nothing
Came from the country then moved to the city
And flew out the country to switch up my views
You cannot do half the shit that I do
In the coupe I'm a dog with no roof 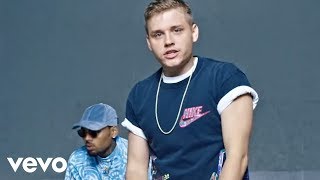