If you'd like to be a jitter bug,
First thing you must do is get a jug,
Put whiskey, wine and gin within,
And shake it all up and then begin.
Grab a cup and start to toss,
You are drinking jitter sauce!
Don't you worry, you just mug,
And then you'll be a jitter bug!

Hear this fat boy blowing his horn;
He's been a bug since the day he was born,
His favorite jitter sauce is rye,
I swear, he'll drink it 'til the day he die!
Toot your whistle and ring your bell,
Oh, butchie-wutchie, time will tell,
Don't you worry, you just mug,
You'll always be a jitter bug!

These four boys playing saxophone,
Order jitter sauce by phone,
Central, give me Harlem 4-9-4,
I think these bugs could drink some more,
They drink sauce from morn to night
And never stop until they're tight,
Don't you worry, they just mug,
They're poor little jitter bugs!

Now, here's old Father, a wicked old man,
Drinks more sauce than the other bugs can,
He drinks jitter sauce every morn,
That's why jitter sauce was born,
See him shake with his trombone,
He just can't leave that sauce alone,
Get along, Father, you just mug,
You'll always be a jitter bug!

There's Rip Van with his eyes a-twinkle,
We named him after Rip Van Winkle,
Like Rip, he'd sleep for twenty years
If he could get his fill of beer,
Rip drinks his sauce, gets on the stand,
Soon he forgets that he's in the band,
Don't awaken him, just let him mug;
He'll always be a jitter bug.
Explain lyrics
Correct lyrics 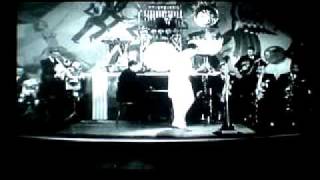