Well I bent down an' says "How ya doin', old fella?"
He tried to get up on his own (On his own...)
When I gave him a piece a' my ham salad sandwich
He reached up an' licked on my nose

[Chorus]
He gave him a piece of his ham salad sandwich
And reached up and licked on his nose
Old Sloan...

Well, I opened the door of my old beat-up semi
Threw an old dirty shirt on the floor (On the floor...)
He hopped in an' laid hisself down by the gearshift
Curled up and started to snore

For years we went truckin' them highways together
On the byways of life we did roam (They did roam...)
With his paws on the dashboard an' his head out the winda
An' his ears in the breeze, gently blowin'

[Chorus]
With his paws on the dashboard, his head out the winder
And his ears in the breeze gently blowin'
Old Sloan...

When one mornin' last May, four miles north a' Mondamin
I stopped to use a pay telephone (Pay telephone...)
Old Sloan made a fireplug, while I made a phone call
An' when I come back, he was gone

Well I searched forty miles of that Interstate highway And the byways that we used to roam (Used to roam...)
From Ricketts to Red Line, Magnolia to Woodbine
But I just couldn't find poor ol' Sloan

[Chorus]
From Fiscus to Jacksonville, Quick to Correctionville
Looked like the end for old Sloan

Poor ol' fella. He didn't have no license, nor shots, nor nothin'.

I thought he's a goner.

When on a cold winter day on the ninth of November
I's drivin' my rig all alone (All alone...)
When my eye caught a blur in my left rear-view mirror
An' my ears heard the sound of old Sloan

He's runnin' as fast as his old legs could run 'im
An' cryin' for me to slow down (To slow down...)
His tail was a-waggin', his tongue was a-draggin'
An' I opened the door for old Sloan

[Chorus]
His tail was a-waggin', his tongue was a-draggin'
And he opened the door for old Sloan
Old Sloan...

Well I gave him a hug as he licked me all over
An' I threw him his old dirty bone (Old dirty bone...)
Then in through the winda jumped a poodle from Pisgah
An' she set on down beside Sloan

[Chorus]
Then in through the winder come a poodle from Pisgah
And set herself down beside Sloan.
Old Sloan...

So that's where ya been, boy. 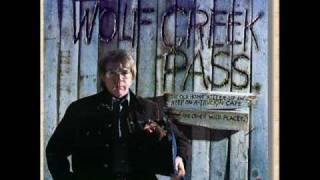