Where I'm From Lyrics

Where I'm From Lyrics

(C-Murder)
I live cross' the street from a killer
Round' the corner from a murderer
Next door to a nigga, that never even heard of a free day
Cause he did fed time about 9
A cold-blooded killer, still dressing like them old times
Their goes some gangstas on the corner slanging crack
If you want the powder, you gots to go around the back
If you don't want trouble, then stay up in your home
In the middle of my block, is where you find the heroine
And the one who kill the most, get the most respect
Its like the motherf*cking law, when you living in the projects
Cause money brings problems, and dope brings killing
And where I'm from, every young nigga willing
To do what they gotta do, on my block
Thats why the best job in the hood is slanging rocks

(Mr. Serv-On)
Now where I'm from, niggas cock the 50. caliber chrome
You ain't real, catch a policy with Mr. Serv-On
You slip on your work, you might lose your wig
In the gumbo, where nigga murder innocent kids
25 the legendary status, cause your surviving
Game soaked in your blood from the g's and thugs
Now slide me the Cong', I get that red in my eyes
I'm so high, I don't give a f*ck if I live or I die
Now where I'm from

(Prime Suspects)
Now where you at on the streets, still hollerin' bout' keep it real
But where I'm from the fakest nigga 'll still split your grill Its cold bro, every man for theyself
Soldiers and warriors throwin' up they ward signs
Represent don't give a f*ck, and where I'm from
N.O.P.D jacking and stacking g's, make me wanna join the force
I heard they serving up ki's,
Now when lose a ghetto hero like my nigga Sluggy G
We bustin' up they second line before we let em' rest in peace
Where I'm from, thats how it is, broken enemies packing them tears
With my niggas, with them wine, cause we getting it how we live
3rd Ward, Parkway, Calliope, ya dig

(Prime Suspects)
Nigga give me gliss, the realest, flip the script like a gymnast
Bullet-proof nigga and street chemist
Bitch I'm in this to win this
And Mortal Kombat you get finished
Where I'm from, every nigga over 12 got a gun
Get done with, if you running with that dumb shit
Get your wig split
Give me the money, you keep the bitches so up it, f*ck it
Cause where I'm from the f*cking drugs and thugs
Run together like them motherf*cking Crips and Bloods
Slugs be busting, nigga f*ck fussing and cussin'
And doing a lil' time ain't bout' nothing
Guilty til' proven innocent, for putting bustas in gurders
If you havn't heard, where I'm from the po-po's never see murder
Nigga

(C-Murder)
I live the life of a killer
One time can't catch me, hennessey and weed
I live amongst a dying breed
Me and you put in the ghetto to make ends
We duck and run from the bullets of our jealous friends
Prime Suspects feel my pain
Its the killer in me, cause I'm true to the game 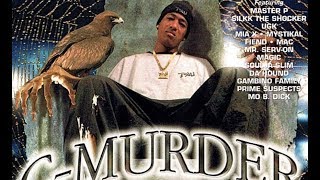