Now, this here story is the story of John Exczeuter Muthor Smoke,
And its for his Mom, its about his Mom,
Its about the Chicken Ranch they had in Southern Utah,
Any they grown the fingernail of a nun, like I have spoken to you
before,
This song is with love, its for love, its about love, its a negating
love,
Its with hate,its not about hate, its love, love is love,
And its about John.E Smoke and his Mom and the baby they had.
Johnny was a little lesbian midget boy,
but he stood ten foot tall with a thermo-nuclear device.
Johnny left home before he was born.
A huge Indian teepee had appeared out of Johnnys earlobe,
He didnt know why.
It spoke French and half-Dutch,
Perhaps the teepee was from Belgium,
We dont know.
All of a sudden Johnny had no reasoning
His life was a tremglescwitch
What is a tremglescwitch?
A way of life that Johnny only knew And there was no telling how much he knew or how little
Because Johnny was a lesbian,
A shoplifter,
A drag queen,
And a surgeon,
A heart surgeon of love.
Pretty soon Johnny was a Chinese Emporer
He owned seventeen 7-11s which were convenince stores,
Known only in the United States.
Johnny sold cocaine, marujuana and alcohol,
A lot of things Johnny said he didnt understand himself,
When a tattoo of Jesus on his chest would occaisionally rise three feet
above his body,
And play poker with him,
Not knowing what to do,
Johnny would bid high,
Jesus would raise him a little,
Johnny would come back and say,
"What have ya got Christ"
Christ would say
"The Ace of Spades"
Johnny was confused again
A lot of litagation went down
Johnny became a black person,
Then an Indian,
And wandered through California,
Got him a trip.............
Explain lyrics
Correct lyrics 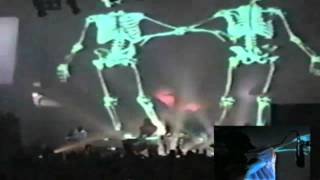