Imagine..your father was naked and you had just fallen through the ceiling into a room full of soft-moist eyeballs.

I can tell you, but my mind keeps fading away.
And you keep trying, but you don't got nothin' to say.
So we tried stealing, but somebody took it away.

Yo! You were in your family car, following a checkered cab that could somehow fly. And as you were watching the flying cab it faltered and crashed into the parking lot of a nearby shopping mall. Everybody in the cab was dead, except for a college buddy who came stumbling out of the wreckage.

He had a weird look on his face and he walked towards you and he tripped. As he tripped, he held out his hand and you grabbed it and it came off in your own hand, spurtting blood everywhere.

Recalling back and forth, you noticed that there was blood on your stomach and chest. And then you realized that Jerry's liver had somehow gotten underneath the shirt that you were wearing and this lady who lived down the street, came out of nowhere, offering you this fingerbowl. So, you washed off your hands. These were the two of the dreams. I was in a big cave and there's leeches, ??????? and in between my toes. They were blasting off like rockets, into the air, and it was causing a lot of pain everytime one crashed near my head and my hair started getting white and stood up in the air. They turned into rockets too. And all this was happening while everyone in my family that I'd ever met, was walking by me naked. They all had boners or swollen clits.

And it was Wicked Ass!

And I (woke up ???) from the dream went back to sleep, and I dreamed that I was camping out and it was raining my tears. And I was Abraham Lincoln too! And I (got a haircut ??????)

And I jumped back down under her, and I became a dentist and I drilled into people's teeth. And I dreamed that i could see tons of people down in the people's teeth.

And the people I was working on all caught on fire. They all burned up.
Explain lyrics
Correct lyrics 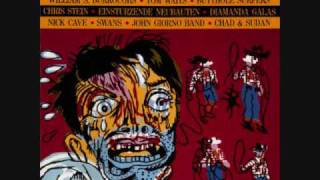