When Canyons Ruled The City Lyrics

When Canyons Ruled The City Lyrics


Laurel was a girl I knew, made of dirt and stone
Pretty hip in younger years but now, she sits alone
With a hundred thousand architectural disasters
That she calls homes

And Beverly Glen was pretty, all the rich boys loved her curves
She tried to get the credit sometimes more than she deserved
Like those cheesy 80's movies epitomized and
All things, we'd come to know

And Nicols, you know he had a way with the performing arts
A and R guys having cookouts on his back with super stars
But it had some nasty habits and some potholes To cover up this drama queen

Sometimes, Beach Wood yelled at Laurel on the terms of selling out
Then laurel yelled at Beverly for not knowing what life's about
With her trust fund friends and family, it felt just like
An earthquake when she'd shouts

And Silver Lake just stood there with her nose up in the air
Pushing up her horn rimmed glasses saying, ?I don't f*cking care
'Bout the drama all you idiots are buying and selling, leasing, up there? 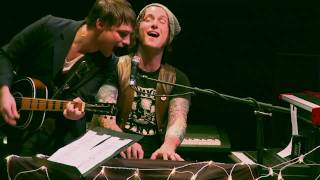