eLyrics B Bust Down Lyrics


* (Bust Down)
Yo whats up ice mike
(mike)
What's up? I'm chillin recording, watching these bitches
(bust down)
What's up cody
(cody)
What's Up ho?
(bust down)
A brother I'm chillin' like, A you heard bout ya boy last week?
I seen him at that mall kissin' his bitch in the mouth

she be suckin' this nigga dick
(mike)
That nigga be trickin'
(bust down)
Every brother thang, baby you can't be mad ain't him
(cody)
What you got in that?
(bust down)
A buddy, I ain't got nothin' to tell her braw
because that ain't nothin' fo me and nothin' to be gettin' into braw
But the other night she called me on the phone
(mike)
What it dat?
(bust down)
I'm tellin ya
but I had nuttin' to tell her
you know what I called her braw?
(cody)
what you call her?
(bust down)
Straight up
she might of got offended
but straight up
I did everything and called dat hoe a

(You know you can't take this dick)

A yo' ice mike
bust dis

Well let me tell ya this story about this braud
A motherf*ckin dyke, bull dank, a rock smokin' dog
Triple X rated, vulgar and explicit
I'm talkin' bout da bitch I call hot twat Bridget
Walkin round town, spread my legs
For any paid motherf*cker that wanna get laid
She's a plocka, docka, plecka, recka made out of skin
She knocked at my door so I said come in
Her nipples was erected, her twat was hot
Just as I came back she was on my jock
Now this was suicide, I couldn't deny
But this hoe could give me one hell of a ride
She put on her night gown, got in the bed
Her throat was so deep she swallowed my head
She started to choke, when I unleased my load
Cum was drippin' out of her noise all ova her clothes
Cum was shootin all around the room
A drop hit her so hard it gave the bitch a bullet wound
She opened her legs, raised her gown
I was lucky I could swim cause I almost drained
I didn't have a rubber, so instead
I f*ck the bitch with my naked head
But then she turned me ova, and started to ride me
She rode me like a horse I said who Kemosabe?
I started gettin' wild, her chain couldn't hold me
I f*cked her from the back and she hollered like a coyote
The hour's gettin' wild, she started to push
But after this night she'd have to take a good dutch
I must admit, this was one hell of a women
Her p*ssy hole smelled like sour cream and onion
But once I got start, there was no stoppin
I hit rock bottom and the p*ssy started fartin'
Woke up the next morning with a cruk in my dick
walk in the bathroom and she was takin' a shit
I said hurry up when ya done whappin ya ass
I'ma f*ck ya again so buy ya p*ssy a cast
She walked in the room with a frown on her face She was limpin, her p*ssy was stretched out of shape
She asked me to take it easy, her p*ssy was numb
I said you act like a dog so I'm f*ck ya like one

A yo Cody
watch dis

Now here's another, example of a no good freak
To keep her name confidential lets call her Monique
Now she was the type, that was always shyk
Walkin round like she was too cute to get pipped
I said yeah, my name is Bust Down straight and direct
I'm already paid so keep ya welfare check
And if ya say ya gotta man, well that ain't shit
You can be his main thang and you can be my BITCH!
She came ova, before she could front
I said get ya hoe and don't you stunt
And if ya sittin there thinkin that you can hit me with ya whip appeal
I ain't baby face bitch I got dick appeal
She laid down, grabbed me by my waste
Got freaky and asked me to piss in head face
She asked one time, I took a leak
Cause could give a motherf*ck about a broke ass freak
She went to suckin' my asshole, it felt so great
I farted in her mouth and made her cheeks inflate
She asked me to eat the p*ssy, started to smile
I said you got all wrong hoe that ain't my style
I turned her ova, she couldn't take this dick
While I was f*ckin her I said you gon' respect me bitch!
The next day I told the boys, I got in that ass
I kicked her out my f*ckin house and made her felt like trash
The moral to the story, its simple and plain for
Every man there's a bitch is if you got game
If you ever meat a freak that you a play
Tell em bust down told ya to say

A yo Braid
Bust dis

Now here's another story, of a girl I met last week
A nasty bitch and a stone cold freak
Now she was fine, shink, and good to go
Now sit back and let me tell you all about this hoe
Now when I first met the freak, she was actin' legit
My home boys told me she could suck a mean dick!
I walked up to her, I showed her a rock
I said you can have it if you lick my cock
So we went behind building, I gave her the dope
then I slammed this dick to the back of her throat
She was workin' it, she was jerkin' it
And when I shot my nut say what she went a slurpin it
Now this bitch, was smoother than soap
But her breath smelled just like spoiled milk
She went to choke, she couldn't take this dick
But I didn't give a f*ck I tried to kill that bitch
When she was done, I had nothin' to say
I gave her the bubble and I was on my way
The next night at the club, I had to dis
Cause she walked up to me and asked fo a kiss
I said 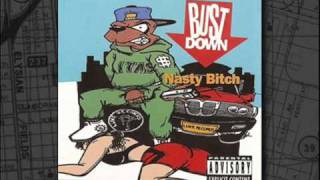