[Intro]
Payback's a motherf*cker!
This is where we take a journey, called karma
What goes around, comes back around
Especially the rules of these streets
It's a bloody war, in the rules of engagement
Eye for an eye, tooth for a tooth
Justice, in the mind of a gangsta

[Bun B]
Hey, Mr. Preacher Man, what do you say?
See you out here tryin to save yourself some people today
You got the good book in your hand and the robe on your back
Steppin out your 2008 Escalade Cadillac
You standin up in the pulpit, lookin out at the pew
Preachin the good word and tellin Christian folks what to do
You talkin 'bout the sinners are sinnin, but let's keep it true
Ain't nobody in this church a bigger sinner than you
It's chapter this, verse that, pass the plate, pay your tithes
Puttin rings on your fingers (fingers) and rims on your ride
You don't need yourself a thousand dollar suit, just to pray in
(Just to pray in) Or a million dollar house for you to stay in (nope)
Marriage counselin, but cheatin on ya own wife
Undercover pedophile, a heathen in ya own right
Let the do'knob hit ya where the good Lord split ya
You's a dirty motherf*cker (so) it's time to get'cha issue, c'mon

[Interlude: Bun B]
The good book say, that he who is without sin cast the first stone
Mayne every time I walk inside the church house
the preacher cuttin his eyes at me
But I know he can't throw nothin my way
He dirtier than I am, ridin down the street shinin, ballin
Hollerin at broads, hollerin at dudes on the cool
That's why niggaz don't go to church now
It ain't the message, it's the motherf*ckin messenger
Let us move on

[Bun B]
Hey, Mr. Policeman, what do you say?
I see you out here tryin to save yourself some people today
You got that nightstick in your hand and you walkin your beat
Or in the blue-and-white car and drivin down my street
You say you here to help the people, and do us some good
Protect us and serve, to try to keep the peace in our hood
Claim you crackin down on the crime, but let's keep it true
Cause the biggest criminals in my city is you
You know police brutality is at a all-time high (high) Pumpin 61 slugs into an unarmed guy (guy)
Tried to say that the assailant had a motherf*ckin handgun
But when you couldn't find one, you motherf*ckers plant one
Rampart scandal, Tupac Shakur
Christopher Wallace, it got me sick and who got the cure?
If the PD, went M.I.A., we wouldn't miss ya
Y'all some dirty motherf*ckers (so) it's time to get'cha issue, c'mon

[Interlude: Bun B]
Look at this shit mayne
Amadou Diallo, Sean Bell, Tupac Shakur, Notorious B.I.G.
Motherf*ckers is dyin out here man
And if the police ain't killin 'em
They not givin a f*ck about who will
Nobody tryin to find out who killed these people
Fat Pat, Big H.A.W.K., this shit ain't right man
Good cop, bad cop, the line blurry every day
Let us move on

[Bun B]
Hey, Mr. Politician, what do you say?
I see you out here tryin to save yourself some people today
You tellin us it's time for a change, people is dyin
And the current administration doin nothin but lyin
You come down to my community and tell us your goals
to clean the system up and get the crisis under control
Claimin you can get us on track, but let's keep it true
The main motherf*ckers keepin us off track is you
Damn near everybody runnin is a member of the senate
They voted to send us to war, so y'all got us in it
Now the shit done hit the fan, and you tryin to say
you wasn't down from the jump but man the shit won't play
Y'all some liars, stealers, philanderers and all
Got senate to suck the dick inside of bathroom stalls
Nah, elected officials lettin the dick kiss you
You's a dirty motherf*cker (so) it's time to get'cha issue, c'mon

[Outro: Bun B]
Man, I don't believe this shit
Motherf*ckers overseas die in that war
We just got rid of a president that didn't wanna do nothin
Sit back and got his dick sucked all day
Now we got motherf*ckin elected people, in office
In motherf*ckin airport bathroom tryin to suck
the dicks half the people on the beat and shit
Now what is this world comin to?
Who lookin out for the children, education, social security
Bring my people back from motherf*ckin Iraq mayne, for real
Let us move on [echoes] 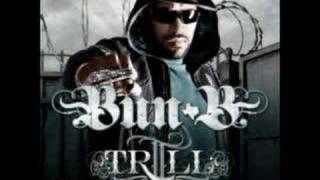