"Hell remains a very democratic place in most religions, with unbaptized
stillborns thrown in the same lake of fire with serial killers and child
rapists. What you call monsters are superior forms, beyond your understanding.
Isn't a man of genius a monster, like a tiger or a spider, like all
individuals who live beyond social lies. It isn't dying that's sad; it's
living when you're not happy. The sexual organ, far from being an object of
infamy and image of impurity, was a god. I took atrocious delight in accusing myself, making myself uglier, more of an outcast and blacker than I was. Have
you become senseless - as senseless as a member of the majority? We live under
the laws of war. It consists of massacring as many men as you can in the least
possible time. Hospitality versus hostility?"

all songs by brutal truth except *it's after the end of the world by sun ra.
extra throat coat on postulate by bill (exit-13) yurkiewicz. 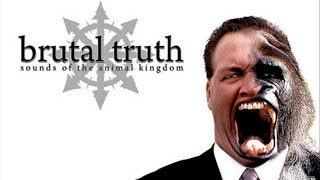