[Verse 1: Brother Ali]
Ain't no stopping the calling I'm a warrior scholar
With the pad and the pen or with the sword and the chopper
Look at how far I got if you lost I could guide you
In between two extremes like Safa and Marwa

[Hook: Brother Ali]
But the weak keep crying and the innocent dying
And these are the times when the real freedom fighters gather 'round

[Verse 2: Brother Ali]
Hostile environment locked in a conflict
Wandering lost in an impossible climate
Boxed in confinement democracy hostage
Bound for the towers monsters in the cockpit

[Verse 3:]
"That is why I challenge you now to stand together. Because together we've got
Power and we can make decisions."

[Amir Sulaiman:]
Justice...
Is somewhere in between reading sad poems and 40 ounces of gasoline crashing
Through windows

Justice...
Is between plans and action
Between writing letters to congressmen and clapping a captain
Between raising legal defense funds and putting a gun on the bailiff and taking the
Judge captive
It is between prayer and fasting
Between burning and blasting

Freedom...
Is between the mind and the soul

But we must learn, know, write, read
We must kick, bite, yell, scream
We must pray, fast, live, dream, fight, kill and die
Free 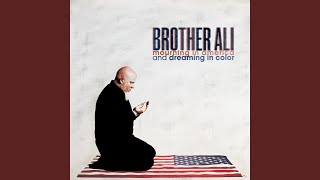