[Verse 1: Brother Ali]
Ant check this out
I'm the luckiest son of a bitch that ever lived, I spend life doin shit I love
Got the world's most beautiful kids and don't nobody do it like us
Sunday morning play Al Green, make pancakes and watch cartoons
Sometimes get to change that scene, catch a plane and see somewhere new
Just got married last year, treated so good that it ain't even fair
Already got a boy, now the baby girl's here, bought us a house like the Berenstain Bears
Not two years ago I was homeless, I mean crashin on the couch of my homies
Now I'm crashin on the couch with Conan, signed a mortgage and bought my home, shit
Should of seen when they handed me the keys, I still couldn't believe that it was mine
Like "baby hurry up let's leave, before these damn people change their mind"
Ha, and shit what can I say? I would have made these damn songs anyway
Some of y'all still listen to 'em everyday, beautiful thing, I bow my hand and pray

[Chorus x2: Brother Ali - w/ ad libs]
I love the life I live, my laughter and my tears
I don't know where it's goin but I like it like it is

[Verse 2: Brother Ali]
Uh, I get a lot of love in my hometown, twin cities, y'all know how it go down
Same club where Prince shot "Purple Rain", advertise my name and it's sold out I'm surrounded by greatness, my loved ones are amazin
Sometimes I look in their faces and just think of the lives they're changin
And I don't just mean Rhymesayers, my son's grandmother quit freebasin
Desiree got eight years straight, now that right there cause for celebration
Ah, I'm so happy for her, we used to fight like cats and dogs
But she ain't even mad that I left her daughter
She calls me her son, so that's my mama

[Verse 3: Brother Ali]
Ah, keep it goin now
All my life I had this music, my heroes have all saluted
I don't need y'all to like my new shit, them dudes are the reason I do this
I done did so much cool shit, lived a lifetime in the last two years
Got the memories to prove it, look what a dude who ain't even graduate high school did
Ha, used to always be the new kid, laughed at 'cause I never used to pull chicks
Now I turn down more girls than them rich ass pitiful ball playin fools get
Sometimes I smile so wide, I think about the dreams that I've lived
Shit even if I died tonight y'all, I'm the luckiest son bitch that ever lived 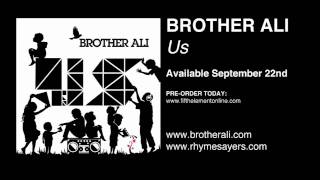